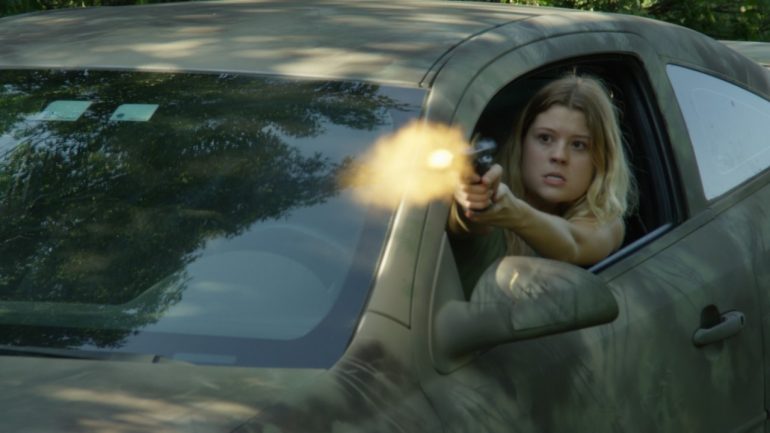 Another RiffTrax worthy student film-appearing flick that’s free to stream on Amazon Prime but ultimately too much trouble to endure.

Plot: A skilled young female agent (Katie Burgess) is tasked with capturing a rogue former agent before she can unleash a biological weapon starting with the wealthy and powerful purveyors of the international sex trade.

Review: We’ll always have Video on Demand outings: some of which are surprisingly well-done considering their low-budgets and that make use of their premises if not their B-movie stars; others that look terribly cheap and are dull to witness; and others that are half-and-half and vary by audience due to looking professional but being hit-and-miss with their material. This film, which can be streamed thru both Amazon Prime and Tubi doesn’t belong in any of those three categories I just mentioned due to the story barely being there (even the copied synopsis is hardly apparent in the actual film), the lead star has neither the look nor the acting talent to convince and the film once again falls victim to poorly drawn-out, pedestrian exposition and uninteresting conversing. Take a look at the trailer and you’ll instantly see virtually the first portion of the film. This 1.9/10 star IMDb rating is FAR too kind and I don’t know who told this writer/director/stuntman he was good at all three so hopefully he returns to the day job he originally had.

Indie Action films are a joy and to see a gimmick that feels like hardly a movie and a poor use of any kind of formula is downright sad. And when there are so many other talented people who could make use of this platform instead of this nonexistent trash being distributed instead is flat-out insulting. It might have the typical expensive cameras but the lighting is still messy and there’s no life to any of the performances. The action is hardly there and is definitely not gonna excite even the lowest common denominator. This only serves to give the Direct to Video label yet another infamous name but this is so amateur that it’s unlikely to be on even Showtime type premium channels (thank goodness).