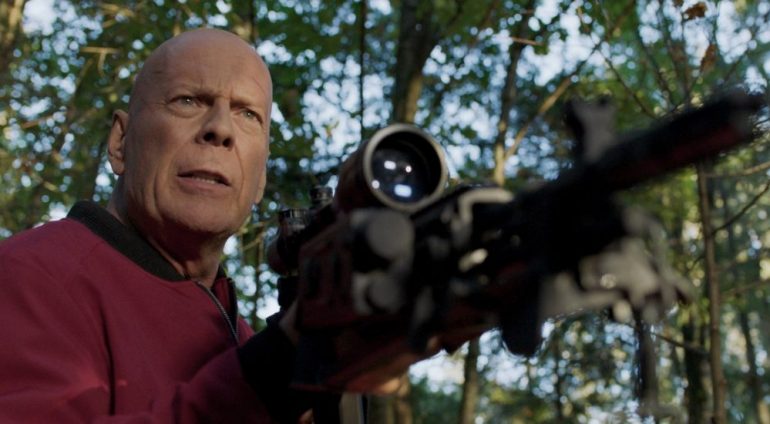 Even Neal McDonough can’t elevate APEX above another cheap looking VOD actioner with Bruce Willis looking tired and doing very little so I suggest watching Hard Target, The Most Dangerous Game or Surviving the Game again instead.

Plot: Five elite hunters pay to hunt down a man on a deserted island, only to find themselves becoming the prey.

Review: I don’t know why I keep dong this to myself; Bruce Willis hasn’t made a decent movie for several years and it’s probably time for him to think about retiring. I was mildly curious about APEX because I like Hard Target/Most Dangerous Game style movies with humans being hunted for sport. The biggest appeal about this was casting Neal McDonough as the villain (for a change) as he can elevate even the most mundane material. He does the best with that he can but APEX is another miss for Willis.

In the trailer he spouts a few one-liners and it gives you an idea that this is going to be John McClane-esque… it isn’t. He says the lines in the movie but it’s like someone pretending to be Bruce Willis and doing a piss poor impression. His delivery is lifeless and you can tell he was probably only on set for a day or two, in fact I‘m pretty sure he and McDonaugh weren’t even on screen together in the final showdown.

For the majority of the movie Willis hides in the forest looking old and tired while the hunters fight amongst themselves. I thought this was an interesting concept at first where the hunters never really get the chance to go after the prey as they are too busy turning on each other but this goes on for an hour while Malone (Willis) watches from the trees.

Only Rainsford (McDonough) seems to keep his head and there’s a reason he’s in charge as he has to stay a step in front of the other hunters. The final 15-20 minutes is when Malone finally wakes up and takes out a few bad guys but when your film is an hour of other people doing things while your “star” sits on the sidelines then it isn’t very exciting.

This is low budget VOD stuff so the visual effects look cheap and the action fails to elicit any thrills so you’re essentially waiting for the end credits to roll so you can watch Hard Target again instead.

Overall, APEX is another Bruce Willis film to avoid with only Neal McDonough proving what a class act he is on screen but generally this is forgettable stuff and there are other, better movies that tell the same story.