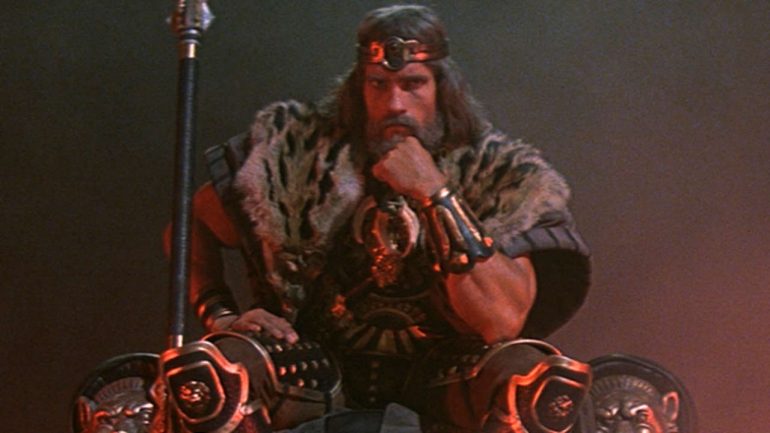 Conan the Barbarian is a slow burn fantasy epic but worth investing time in for Arnie’s awesomeness and the fact that it is unlike any other film.

Plot: A vengeful barbarian warrior sets off to avenge his tribe and his parents whom were slain by an evil sorcerer and his warriors when he was a boy.

Review: When I was younger I wasn’t a fan of this movie; frankly I found it boring and admittedly it is still quite slow in places with some unintentional humour, but it’s still awesome. Why? Arnold Schwarzenegger; say what you like about him but this is the role he was born to play.

He’s monosyllabic and speaks more with his eyes… and sword, however this isn’t the hack and slash film you might be expecting. Yes there is plenty of blood splattering violence but it’s mostly about Conan the Wanderer, trying to get over the mental and physical torment he went through for 20 years when he was a slave.

As a child he watched his mother and father brutally murdered in front of him, so he vows revenge. On his quest he meets a few companions and even falls in love with one of them: Valeria.

The interesting thing about this “courtship” is that he only says one line to her in the entire movie. It’s all stolen glances and it works so much better than lame speeches. Actually the movie itself barely has any dialogue; it’s almost a silent movie, especially in the first half.

The best thing about the movie is the fantastic score from Basil Poledouris; it’s genuinely epic sounding with a great theme tune.

James Earl Jones is a great villain and he has the coolest name in this movies: Thulsa Doom and he is a nasty piece of work too.  Keep an eye out for Arnie movie regular Sven-Ole Thorsen as the villainous Thorgrim.

It’s an incredibly surreal movie too; there were points when I was like “errr, what?” but was totally into it so just went with the flow.

Some of the imagery was great though, like the spirits of death coming for Conan while Valeria tries to fight them off; that was one of the best scenes and was creepy as Hell too.

Overall, Conan the Barbarian is a slow burn fantasy epic but worth investing time in for Arnie’s awesomeness and the fact that it is unlike any other film.