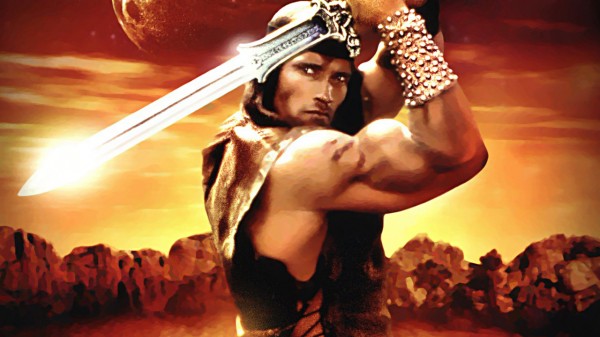 Conan the Destroyer isn’t a patch on the original but it’s better than Red Sonja and has enough entertainment value to be worth a watch.

Plot: Conan, the swashbuckler, is promised that his dead love will be revived if he procures a magic crystal from a magic fortress. He gathers Grace Jones, Mako, and Tracey Walter (fighter, wizard, and thief) to help him as he overcomes the perils on the way.

Review: Conan the Destroyer is quite a different movie from the first one; it’s not as epic in scale nor does it have the kind of depth and it’s essentially more of a family adventure. In the first movie Conan hardly spoke unless it was to Crom or about crushing enemies, etc. In this he is almost a parody of himself and at points is quite sad to watch. *See Conan getting drunk, walk into someone and pass out*

He still gets to lop a few heads off and it is surprisingly violent for a PG rating; the one thing I liked though is that this movie is well paced. There is action from the start and doesn’t let up really until the end.

It’s super cheesy and some of the effects are dated but Arnold still embodies Conan perfectly and I just love these kinds of movies. It has some silly (yet awesome) monsters and Arnie really gets to show off his prowess with a sword in spectacular fashion.

The story itself isn’t all that exciting; retrieve a magic crystal so Conan can revive his dead love; things of course don’t quite go as planned and Conan ends up alone again by the end.

Basil Poledouris returns to score but for some reason doesn’t keep the same music, giving us a fun score but once again not as good as Conan the Barbarian’s. It lacks a really memorable theme tune and even now I can’t remember how it sounds.

Sarah Douglas (Superman 1 & 2) adds some class to proceedings as the treacherous Queen Taramis and was always an excellent villain. She could play cold and ruthless so well.

It’s nice to see Mako return as Akiro the Wizard who manages to keep a straight face while making various bizarre sounds.

I wasn’t a huge fan of Tracey Walter as Malak who is more of a coward and “comic relief” character that simply isn’t funny. He’s not Jar Jar bad though and does get to use knives on people in a cool way so he gets a pass.

Grace Jones utterly belongs in this movie, no acting required for her to play a crazed warrior woman; she just is one and required no acting experience. Born for it.

Overall, Conan the Destroyer isn’t a patch on the original but it’s better than Red Sonja and has enough entertainment value to be worth a watch.