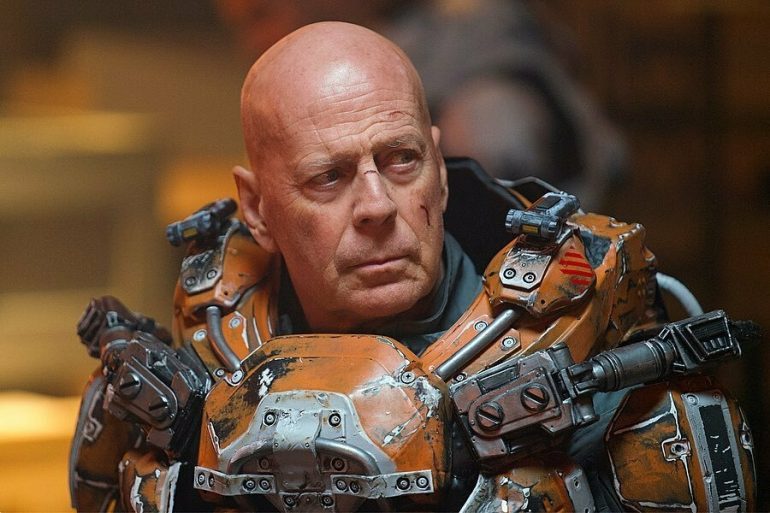 For hardcore sci-fi and anime-inspired completists, wait for Netflix or Tubi to stream it. While not the worst genre pick, it still feels like an incomplete mini-series rushed and edited together in a random compilation too quickly to become truly gripping. Cool looking armor, robots and weapons though!

Plot: Three centuries after the Mars colony failed in 2281, the Alliance colonies of Earth and Ellora are still at war with the alien planet of Zafdie. Now, in 2524, the are 7 warriors tasked with ending the alien conflict- including nuke-savvy General Ford (Bruce Willis, Die Hard saga), military supervisor Bleck (Costas Mandylor, The Last Ship) and heroic General Ryle (Frank Grillo, The Purge 2 & 3).

Review: Again, sorry (but not really), I’m a Bruce Willis defender much like many others who defend the awful films of the likes of Nic Cage, Steven Seagal or even Christian Slater. Bruce falls in the category BETWEEN popular names doing B-movies with a limited and digital release (like Wesley Snipes, Sylvester Stallone, John Travolta and Jean-Claude Van Damme) AND actors past their prime but still kicking (Tom Berenger and Val Kilmer to name a few). Bruce can still arguably be good when he’s the lead in a mainstream film but yet he still seems to do too many productions where not enough takes are being done, he looks sleepy or he’s apparently getting pissed off. Right now, the likes of VOD common names like Dolph Lundgren, Karl Urban and even Cuba Gooding Jr. reside there too so I guess Bruce is somewhere alongside them at that level when we’re not rewatching his Planet Hollywood classics.

Was this film here going to be as awful as Vice, Saturday morning Expendables-type fun like Hard Kill or another decent crooked cop flick like Marauders and Final Kill? Honestly, it’s just a forgettable yet average film. I’m a B-movie guy and spent plenty of time skipping through annoying films listed on Amazon Prime or Netflix but this is more of a lazy-day film you watch on Showtime or HBO when you’re done with yard work and want to watch a random film with space combat but don’t really want to pay attention to the actual generic plotting.

I found the filmmaking duo Edward Drake and Corey Large (who also co-star) to do decent work prior (their numerous credits include many other action-horror-crime films and they previously did another space film Breach (also with Bruce) that was harmless yet somewhat mindless fun. This is also rather mindless yet too mindless at times. However, many reviewers of this were picking apart things in the background and not noting any of the other interesting stuff that is here like the Blade Runner type bar in the opening Western town, the rather solid costume designs (somewhat akin to Armageddon and Pacific Rim) and the Halo type combat scenes in the second half. That being said, yes, it’s also far too derivative of better sci-fi combat films but I also found it far better than some of the lesser Sy-Fy Channel material and the last dozen or so Aliens/Predator clones I encounter thru streaming sites.

It was interesting to see B-movie regular Costas Mandylor as he appeared to be having the most fun. I guess he’s glad to not have to be in some weird Horror film or Erotic Thriller for a change like he usually is. Surprisingly, this time, the main disappointment is hardly Bruce (as he’s just giving the same sheepish look he typically gives) but Frank Grillo not doing enough and sitting in the main cramped spaceship dropping the bomb for the kamikaze run. Was his day rate too high for even Saban Films? Saban is rather hit-and-miss film-wise but I dug some of their films starring John Travolta and Aaron Eckhart, and they recently did the Power Rangers big-screen flop.

Saban did plenty of other anime co-productions and this definitely has the feel of something you’d expect to see on Toonami or a cult anime site. And with that mindset, it’s probably most entertaining because it unfortunately doesn’t transition well for a larger audience expecting something as silly as even Independence Day or one of Grillo’s Skyline type sequels. It’s not a 2/10 star rating like IMDb claims but it’s also not a 7/10 star rating either. I’d place it in the middle because while it’s not a remarkable film on any of the actors’ resumes, it was B-Sci-Fi that has the look of an ambitious indie film but also feels hardly above a better cable telefilm diversion. Either they meant for this to be a mini-series or the filmmakers couldn’t resist reusing props and actors from their last film Breach but a different format would have worked far better. They could have used the small-screen or streaming site method to build a fun epic and instead we got a lazy version of the Seven Samurai nuking aliens. Why not just 3 warriors piloting a nuke considering that none of the other guys could be told apart from one or the other?