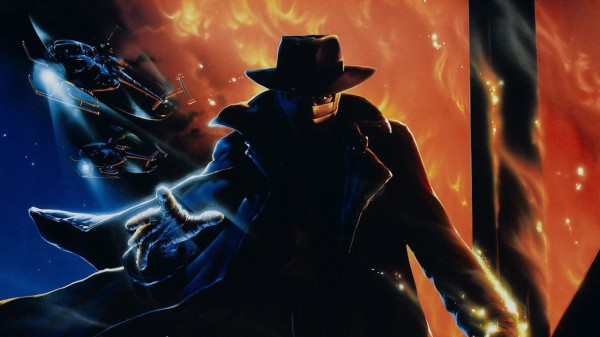 Darkman is still hugely entertaining with some great performances and plenty of action; it’s dated a bit now but still worth watching.

Plot: A brilliant scientist left for dead returns to exact revenge on the people who burned him alive.

Review: This is a movie that has pretty much been forgotten by audiences but it’s always had a special place in my heart. Liam Neeson is fantastic as Dr. Peyton Westlake; a brilliant man who is turned into a hideous monster… in more ways than one.

He starts off as as scientist who has nearly perfected regenerating human skin but it all goes pear-shaped when he mistakenly comes into possession of documents from his far too nosey girlfriend.

Although it’s mostly darkly funny, there is a “Frankenstein’s monster” type tragedy to the story, giving it more depth than you’d maybe expect.

Frances McDormand plays Julie Hastings, Peyton’s love interest and really it’s entirely her fault that he becomes disfigured… bitch. If she’d just shut up about the pay-offs to Louis Strack (Colin Friels) then everything would have been fine… but it would have made for a short movie.

Friels is a great smarmy villain and he’s only let down by his “I Built it all” speech at the end which is very cheesy; with Raimi though I’m pretty sure that was deliberate.

The other villain Robert Durant played to perfection by Larry Drake terrified me when I was a kid but watching him now, he’s really more funny than anything.

Directed by Sam Rami, it has all of his trademark editing and a relentless fast pace that will keep you glued until the end credits. Admittedly some of the visual effects haven’t held up well with some crap blue screen which did take me out of the final helicopter chase.

It’s also over a bit too fast at just under 90 minutes; I’d love to see a Director’s Cut and spend more time with the characters. There were a few sequels where Neeson didn’t return but I think I will give them a watch out of curiosity.

Danny Elfman’s score is very Elfman sounding with the usual choirs and manic instruments; it’s fine but it’s not as good as his Batman score from 1989 which remains his masterpiece.

Overall, Darkman is still hugely entertaining with some great performances and plenty of action; it’s dated a bit now but still worth watching.