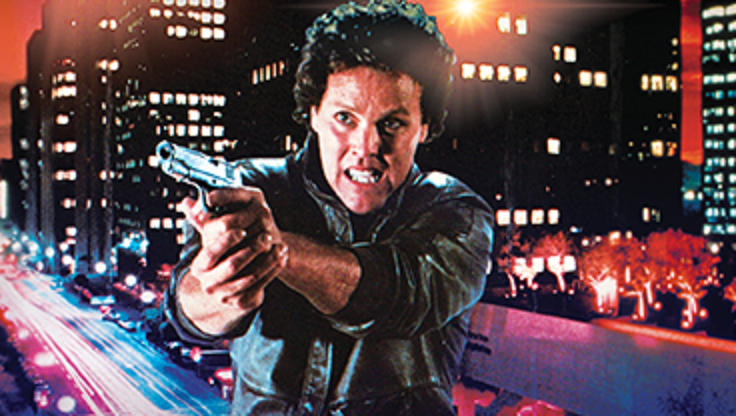 Deadly Force doesn’t have much going for it and it’s hard to recommend forking out the money for such a sub par movie.

Plot: The X-killer is too insane to be caught. But one ex-cop is just crazy enough to try.

Los Angeles is in the clutches of terror as a killer stalks the streets. Seventeen people have died and the only clue is an “X” carved in the forehead of each victim. Enter Stoney Cooper (Wings Hauser), a former police-officer-turned-private-detective. He’s super-tough, rebellious, and angry and vows to bring the psychopath responsible for the “X-murders” to justice.

When innocent people are at risk … when the police are powerless … when nothing else will do … your only recourse is Deadly Force.

Review: An action-thriller from the early 1980s, Deadly Force which was recently released on Blu-ray by Shout! Factory’s Scream Factory subsidiary’s recent glut of cops vs. psycho killer movies that includes the Cannon classics’ Cobra and 10 to Midnight, however be forewarned that Deadly Force does not deserve to be mentioned in the same breath as those far superior and much-loved cult films.

Starring the curly haired charisma-free Wings Hauser as ex-LA cop Stoney Cooper who returns to the city to help an old pal (Al Ruscio) find the killer of his granddaughter, the notorious X-killer who has been terrorizing Los Angeles for weeks.  Not surprisingly Stoney isn’t welcomed home by either his one-time colleagues at the LAPD nor by the local crime syndicate headed by Ashley Maynard (Arlen Dean Snyder) and leaving no cliché unturned an estranged wife (Joyce Ingalls) that hates his guts.

Completely lacking in suspense, no attempt even seems to have been made, and full of routine action sequences including a rather number of dull car crashes. Deadly Force more than anything is hampered by its lead character and the film’s star.  Stoney Cooper is a real unpleasant guy and Hauser is unable to make us care or root for him to succeed. The movie is further hindered by one of the least interesting bad guys in action movie history, the so-called X-killer, who has no personality to speak of, little dialogue and too much screen time. Thanks to poor pacing and a dull reparative film score it isn’t long before Deadly Force descends into annoyance and aggravation.

Before seeing the picture I was actually looking forward to this release and thought I might even love this movie; it’s of a subgenre that I hold dearly and Shout! has been good at spotlighting hidden movie gems. This is no gem though, the company should almost be ashamed of having their logo on such a disappointment.