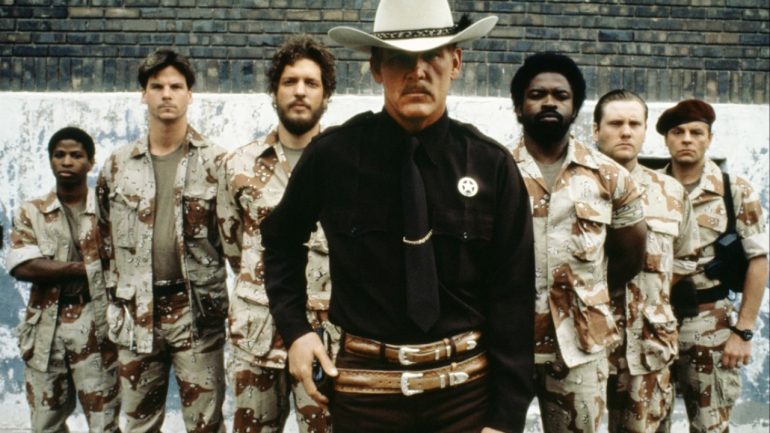 Extreme Prejudice remains a classic of the genre and one of Walter Hill’s best movies.

Plot: A Texas Ranger and a ruthless narcotics kingpin – they were childhood friends, now they are adversaries…

Review: Walter Hill is one of the most under-appreciated directors in the business; he has some classic movies under his belt and Extreme Prejudice is one of them. It has one of the best casts of the 80’s including Nick Nolte is at his most badass and Powers Boothe as a nasty but not cartoonish antagonist.

Nolte for some reason seems younger in this than he was in 48 Hrs. and that was several years before this; he doesn’t quite have the gravelly voice he later developed, so clearly he needed to smoke more cigars.

The story to this is more layered than your average action of the era; I love the whole idea of two childhood friends who grow up to become enemies that grudgingly respect each other. It adds so much more drama and tension to the story.

Every performance is fantastic and the script is top notch; the film stands up really well too with a classic music score from the late, great Jerry Goldsmith.

I love how Forsythe pretty much has a cigar in his mouth all the way through the movie; it’s one of the manliest movies ever made and I guarantee you will have more chest hair after watching. *

The story has great twists and turns and feels almost like a modern Western with the final 15 minutes climaxing with a hail of gunfire and bloodshed.

Overall, Extreme Prejudice remains a classic of the genre and one of Walter Hill’s best movies.