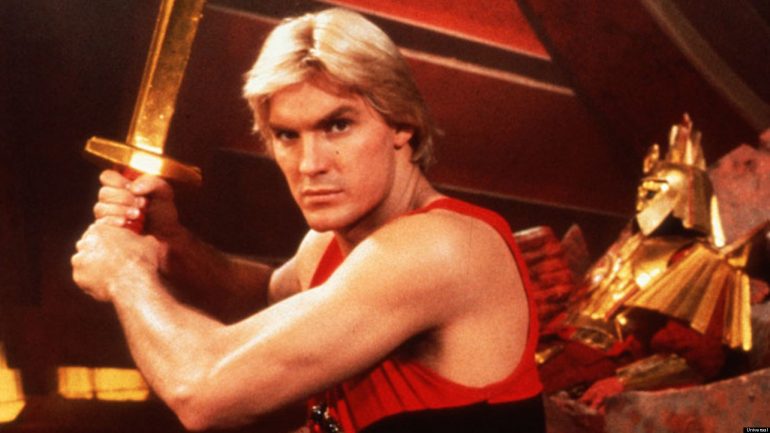 Plot: Although NASA scientists are claiming the unexpected eclipse and strange “hot hail” are nothing to worry about, Dr. Hans Zarkov (Topol) knows better, and takes football star Flash Gordon (Sam Jones) and travel agent Dale Arden (Melody Anderson) with him into space to rectify things. They land on planet Mongo, where the despot Ming the Merciless (Max von Sydow) is attacking Earth out of pure boredom. With the help of a race of Hawkmen, Flash and the gang struggle to save their home planet.

‘Flash AHHHH!’ We all love the Queen soundtrack from this cheese-filled classic; I recently picked up Flash Gordon and gave it a re-watch and as much as I’ve always enjoyed movie we all know that it doesn’t really hold up well (aside from the music).

The acting is mostly terrible, especially by Sam Jones who plays our protagonist but you just can’t hate a film with Brian Blessed as Prince Vultan who laughs and bellows his way through the entire picture. It’s also the villains Ming (Max Von Sydow) and Klytus (Peter Wyngarde) who bring some sardonic wit to the ridiculous proceedings. Klytus always scared me as a kid so it’s a wonder I made it through high school.

I also loved Timothy Dalton as Prince Baron who although at first comes across as a bit of a dick, redeems himself in the second half to become a total hero.

The effects don’t hold up well and have become horribly dated but it is at least very colourful with some hilarious costume design; there is apparently a reboot in the works (of course) so I’m intrigued to see what direction they take it in.

The movie has its tongue planted firmly in its cheek and knows how silly it all is but if you didn’t grow up watching it in the 80’s and watch it now for the first time you will most likely find it unwatchable.

Overall, Flash Gordon is a fun piece of cheese with plenty of humour, awesome music and a sense of harmless fun but it has dated quite badly and I think modern audiences would just laugh at it rather than with it.