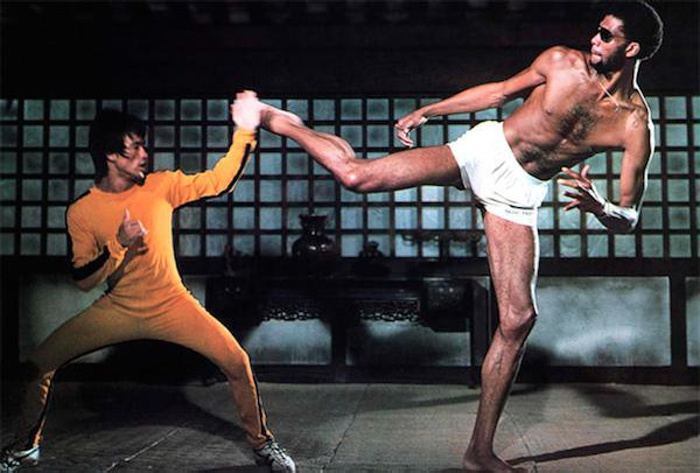 Game of Death feels a little disjointed with some obvious doubles, due to the tragedy surrounding it. It’s worth watching for the final fight scene with Kareem Adbul-Jabbar and the scenes involving nun-chuks.

Plot: A martial arts movie star must fake his death to find the people who are trying to kill him.

Review: Game of Death is arguably Bruce Lee’s most famous movie after Enter the Dragon; the climactic fight with Kareem Abdul-Jabbar is an absolute classic with Lee as always showcasing his stunning martial arts skills. I love how in every Lee movie there is a nun-chuk scene which I could watch all day.

Kareem Abdul Jabbar doesn’t need to do much in the film and like Chuck Norris in Way of the Dragon, he’s only in a couple of scenes before the final showdown.

The story is actually pretty decent and the villains are hateful bastards, particularly the old man. As with most Bruce Lee movies, the legendary Bob Wall makes an appearance and has an awesome fight in a locker room with Lee… at least I think it was Lee.

He sadly died during the making of this movie so there are several scenes where they obviously used stand-ins and they didn’t really look like Lee so it took me out of the film a few times.

I wasn’t a fan of the voice they used to dub over Bruce as it has zero personality to it; because of the tragedy surrounding the movie, it does sometimes feel more like a tribute to Bruce Lee rather than a full movie in its own right. The story makes sense and everything, it just feels a little off.

It has a surprisingly awesome score by the late, great John Barry giving it an almost James Bond vibe in places.

Overall, Game of Death feels a little disjointed with some obvious doubles, due to the tragedy surrounding it. It’s worth watching for the final fight scene with Kareem Adbul-Jabbar and the scenes involving nun-chuks.