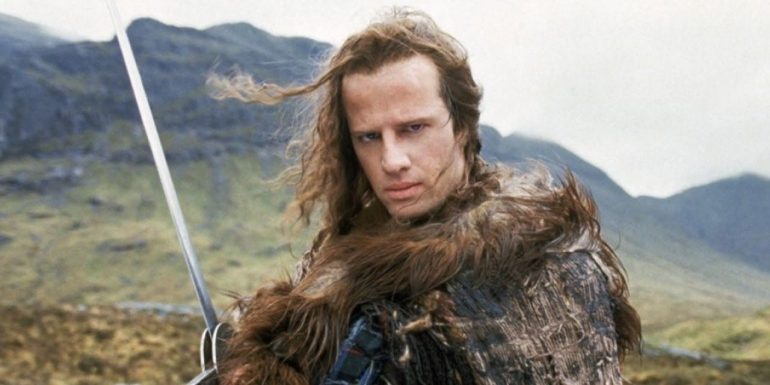 Plot: When the mystical Russell Nash (Christopher Lambert) kills a man in a sword fight in a New York City parking lot, he leaves a sliver of an ancient weapon lodged in a car in the process. After brilliant forensics specialist Brenda Wyatt (Roxanne Hart) recovers evidence of the mysterious weapon, she and her partner, Lt. Frank Moran (Alan North), embark on an investigation Of Nash that will land them in the middle of a dangerous, centuries-old feud between powerful immortals

It had been a few years since I last watched Highlander and for some reason I totally forgot it was a Cannon film which now makes me love it even more.

It feels like only yesterday when I had watched this move for the first time and now all of a sudden it’s over 30 years old; I always found Highlander to be a very strange and imaginative film unlike anything I had seen before. The story is way out there and genuinely original and it really resonates with you as a viewer as you get older and start to think more about your own mortality.

The scene of MaCleod sitting with his aged wife who is dying in his arms as he remains the same age is the most heartbreaking scene of the movie; the use of Queen’s “Who Wants to Live Forever” is simply perfect in capturing the mood.

One of the best elements about Highlander is the music; Michael Kamen’s epic score along with Queen’s still transcendent songs really provide a great atmosphere. It’s such a shame that Kamen and Freddie Mercury passed away so young (RIP).

Obviously some if it has dated now and Christopher Lambert does one of the most hilariously bad Scottish accents I’ve ever heard, but he still manages to be sympathetic in it. He always had great charisma and screen presence and I loved him in movies like Fortress and Gunmen.

Sean Connery chews the scenery as Ramirez who is apparently of Spanish/Egyptian descent and yet still doesn’t even bother with an accent but the way I see it is he’s over 2000 years old so his accent is bound to change over time. His attire is hilarious but Connery still manages to bring dignity to his character because… well he’s just Sean Connery.

The movie practically belongs to Clancy Brown who plays the The Kurgan; although he is an over the top villain he is simply magnetic and his voice is perfectly menacing. No one says “hello pretty” like he does. The scene in St. Patrick’s where he talks with McCloud is another highlight and to this day he remains one of the best movie villains of the 80’s.

I was reading that according to director Russell Mulcahy, when they first shot the scene of the Kurgan bursting through a door to cut the table in half, Clancy Brown instead ran in and cut through the candelabra, nearly decapitating Sean Connery. As a result, Connery stormed off the set. Later, Connery returned and Brown apologized, saying he was very nervous. Connery joked that he should use his stunt double more.*

IMDB also provides more info on the Kurgan’s backstory which is explored in the original novel: His first death occurred in 970 B.C., when his drunken father crushed his head with a rock. Upon returning to life, the Kurgan proceeded to force his father to swallow a searing hot stone, killing him. He then went off to join a group of bandits that raided caravans. He eventually encountered another Immortal, “The Bedouin”, who revealed to him his true nature, and who became the only person who could be labelled as his friend. During the intervening centuries, the Kurgan took an incalculable number of Immortal heads. Circa 410 A.D., the Kurgan joined the Vandals, Goths, and Visigoths in attacking Rome and other Roman settlements, also fighting with the Goths against the Huns. He would then later ally himself with the Huns directly, fighting alongside Attila, around the year 453. From the fifth to thirteenth centuries, the Kurgan would spread terror with the Tatars of the Gobi and ancient Turkey, as well as with Viking raiders and the Mongol horde of Genghis Khan.*

One thing I love about Highlander is the fact that the scenes in Scotland are actually filmed there. Shot in and around Eilean Donan Castle, Glenfinnan and Glencoe my homeland has rarely looked better and made me homesick to see those fabulous mountains again.

Overall, even though some of the effects have dated Highlander remains a fun, imaginative fantasy/action film that will live forever. It’s legacy includes multiple sequels, a TV series and a cartoon; with a reboot rumored for quite some time it’s only a mater of time before the Highlander is reborn. If we do get a reboot how about casting Richard Madden? He is a genuine Scot after all which would be refreshing…