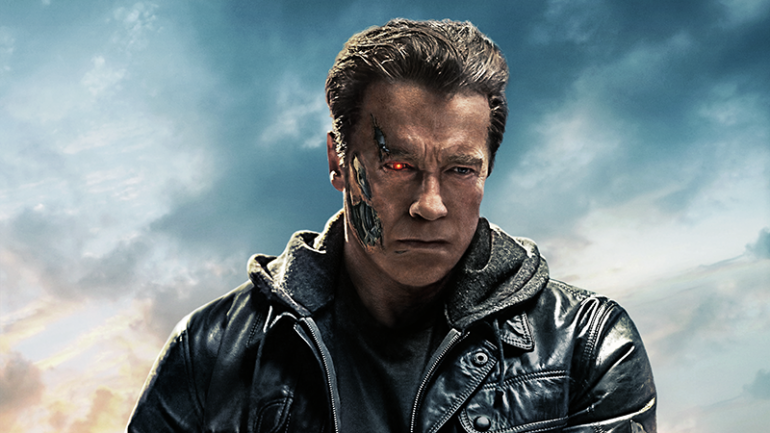 It’s very early in the game to come up with a definitive answer as we know so little of the plot to the new Terminator movie or more importantly how big Arnold Schwarzenegger’s role will be. It’s pretty clear that now his star has fallen considerably and his days of being a box office draw are behind him, but let’s take a look at the pros & cons of the movie and make an impartial assessment.

As I’ve said before, there isn’t a lot of goodwill towards The Austrian Oak from the public after his extra-martial affair; a lot of fans also think he’s just getting too old to star in action movies. He is approaching 70 and many think he should retire with dignity or play mentor-style roles.

Considering the low box office results of The Last Stand, etc. I’m wondering if that many people really want a new Terminator movie.

We have no idea at this stage how big Arnie’s role will be in the movie or even if he’d be playing a Terminator.  According to Le Canadian“Arnold Schwarzenegger might not play the role of the machine in the upcoming film but a potentially heroic human figure in or close to the Connor family. One theory is Schwarzenegger’s remarkable ability to protect the Connor family in the 40′s or 50′s with antiquated weapons by today’s standards ultimately inspired the machines to develop a terminator in his likeliness that was soon sent to 1984 when Sarah Connor was first targeted for termination,” an insider revealed recently.

So if Arnie isn’t The Terminator then who would we get to play the evil machine? I thought Dwayne Johnson had been rumored but nothing has been officially announced. Either way, if they try to use Arnie as the main selling point then the movie will probably die at the box office. Johnson is “Franchise Viagra” and would be the obvious choice as he would attract the younger audience.

The supporting cast hasn’t exactly blown people’s skirts up either with Jai Courtney of A Good Day to Die Hard fame being cast as a young Kyle Reese; I actually liked Anton Yelchin from Terminator Salvation and would have liked to see him play the role gain but alas, that doesn’t look like it’s going to happen any time soon.

But it’s not all bad; personally, I’m optimistic and I really like what Arnold said the other day: “Terminator is going to have the exact same feel. The way it reads, it has the same feel of Terminator 2. It’s big. There’s hardcore action and it has some really great visual effects in there, but not over the top. It’s not a Thor type of movie, even though it’s the same director. It has good special effects, but just enough to say, “Wow, where did that come from?  How did they do that?”

If it’s half as good as T2 then I’m sold as it’s one of my favourite movies of all time. My main problem with Terminators 3 & 4 was how unnecessary they were; Terminator 2 wrapped things up nicely and gave closure to the story, then it all got super confusing by introducing alternate timelines. T3 felt like a parody with far too much lame humour and it even changed the theme tune to some forgettable drone without using Brad Fiedel’s masterful score. Salvation wasn’t too bad and laid the groundwork for a new trilogy but it looks like this new movie may end up being set in the past or modern day.

The only story there is left to tell for me is how it all ends; what is it that John Connor does to finally defeat the machines and win the war? I want to see the epic futuristic battles promised in the opening of Terminator 2, etc.

One of the biggest selling points for me is director Alan Taylor who directed Thor: The Dark World which thus far is my favourite Marvel movie. Excellent visuals, great humour and a sense of scale proved that he just might be an excellent choice for Terminator.

So will it be a hit or miss? I think it will be bigger than Arnie’s recent output, especially if he isn’t the main lead. I think a medium-sized hit, but until we see a trailer and have a better idea about the story then it’s tough to say…