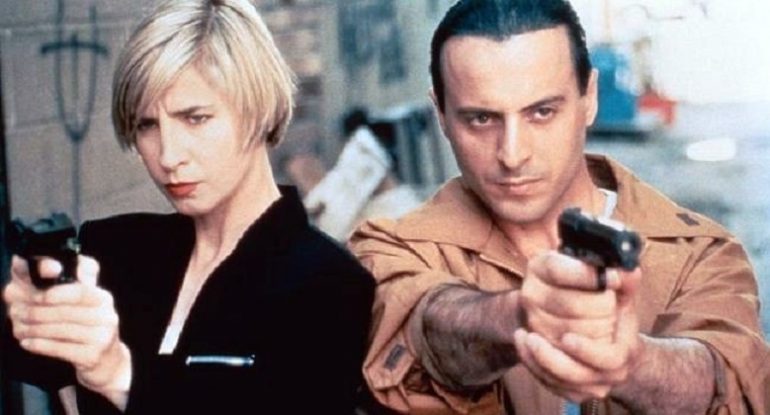 Looking Back at The Tiger Claws Trilogy

The Tiger Claws Trilogy stars Cynthia Rothrock and Jalal Mehri as two cops who trade buddy banter while trying to take down bad guys; the first two movies have Bolo Yeung on villain duties whereas the third movie has the King of the Kickboxers himself Loren Avedon. So let’s take a quick look back at this entertaining trilogy.

Plot: The police do not know what to do. They have to deal with a serial killer who hunts martial arts masters. One after another is killed in the same brutal way. This may be a chance for detective Linda Masterson to work on her first murder case.

Tiger Claws is a pretty awesome straight to video martial arts flick starring Cynthia Rothrock, Jalal Mehri and Bolo Yeung. It’s worth watching simply for the fights between Rothrock and Bolo and the final fight between Jalal Mehri and Bolo. There’s almost constant fighting from beginning to end and I really liked the story too.

Obviously you know Bolo is going to be the killer because his name is in the opening credits. Oh Bolo is in it? He’s the bad guy. It doesn’t really matter though as you find out after 20 minutes; the rest of the time is waiting for the two cops to catch up with us.

I just love watching Bolo on screen; he never needs to say anything. He just has one of those commanding presences that means you can’t take your eyes off him. He’s also absolutely huge and his muscles are bigger than my head.

Some of the acting is a bit dodgy in places but with a movie like this it doesn’t matter; you just want to watch people getting beaten up and there’s plenty of that. The two rival cops get a bit annoying by the end of the film and I was really hoping they’d get killed off but alas, no dice.

As I said I found myself getting really caught up in the story as it had a bit of mystery to it as well as non-stop action.

The music was almost Terminator-esque in places and although dated sounding now it was really cool and I enjoyed it.

Overall, Tiger Claws is a fun martial arts flick with plenty of fight scenes and a great story; Rothrock and Mehri are fun to watch on screen and you can never go wrong with Bolo on villain duties.

Bolo was an all-out psychopath in the first movie however, in this he’s almost more of a good guy as he has a code of honour. He’s manipulated by his brother into entering a fighting tournament to avenge his master but things aren’t quite what they seem.

Richards (Jalal Merhi) and Linda Masterson (Cynthia Rothrock) trace Chong (Bolo) to a tournament and end up fighting for their lives.

Once again some of the dialogue and acting aren’t exactly amazing but there are plenty of fight scenes and it’s very well-paced.

I could have done without the fantasy element with the magical portal which was definitely a shark jumping moment. It really changed the tone from the first movie and felt out of place. It doesn’t really matter though as it’s all just an excuse for more fights which is never a bad thing.

Cynthia and Jalal trade buddy banter with each other throughout remaining an entertaining double act and then we have Evan Lurie who hams it up nicely as arrogant villain Victor. He has a great fight scene with Cynthia in the finale which is one of the main reasons for watching.

Overall, Tiger Claws 2 loses points for some of the sillier fantasy elements but it’s redeemed by first rate fight scenes and a fast pace with Rothrock and  Mehri once again proving a great duo.

Plot: When a psychotic martial artist called Stryker resurrects the long-dead spirits of three ancient Chinese master assassins in an effort to take over the New York underworld, it’s up to supercops Tarek Richards and Linda Masterson to stop him. However, it’s not so easy to battle the undead, and though Richards apparently holds within him the key to defeating these “Masters”, he will need the guidance of Stryker’s former master to aid him… let the battle begin.

Now we come to the third and final entry in the series and this movie truly embraces the more fantastical elements that second movie introduced with our three new bad guys looking like they came straight out of Richard Donner’s Superman films; my first thought was “oh it’s General Zod and friends”…

Bolo doesn’t return (aside from one brief flashback scene) but this time our main villain is played by none other than Loren Avedon who steals the entire show. He brings a lot of humour to proceedings and is clearly enjoying every moment.

Wait… is that Russell Peters? Why yes it is in a very early role who looks like he’s trying not to laugh throughout.

I go into some spoilers ahead so if you haven’t seen this movie then best stop reading now.

This one goes in some surprising directions; for one thing they kill off Cynthia Rothrock after 10 minutes which I didn’t see coming… or did they? The story basically involves Tarek (Mehri) training to learn the Black Tiger style in order to defeat these 2000 year old villains so it feels like a mixture of Big Trouble in Little China meets Mortal Kombat which I have no issues with at all.

My main problem with this movie is after getting invested in the story and watching Tark take on the villains in awesome smackdowns… he wakes up. Yes, it was all a dream or a vision of what may come to pass to be more precise but it was a total copout and to this day pisses me off as an ending.

The final fights deliver exactly what we would want in terms of action although the fact that Cynthia has taken a back seat in this entry is a big let down.

Aside from that though Tiger Claws III is a blast and Merhi and Rothrock have great on screen chemistry together with Loren Avedon stealing every moment he is on screen; so if you haven’t seen this trilogy it’s worth checking out for old-school action thrills and b-movie greatness.