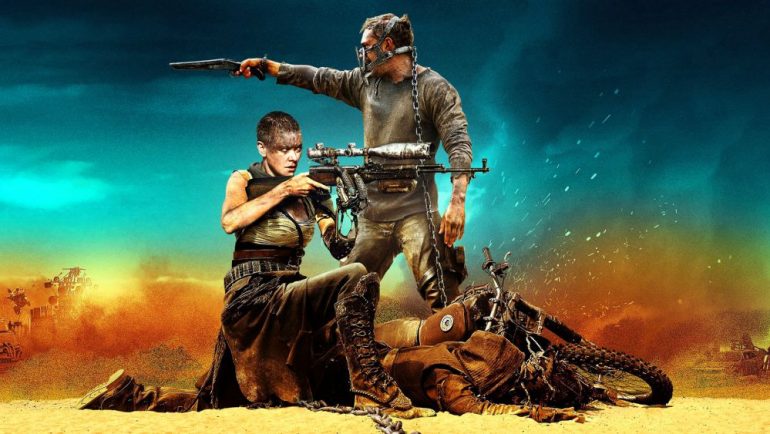 Fury Road came out of nowhere and blew me away arguably becoming my favourite Mad Max movie to date.

Plot: Though determined to wander the post-apocalyptic wasteland alone, Mad Max (Tom Hardy) joins Furiosa (Charlize Theron), a fugitive imperator, and her band who are all trying to escape a savage warlord.

Review: I have a confession to make; I’ve never really been a huge fan of the Mad Max films; I enjoy The Road Warrior a lot and all three have their moments but they just aren’t in my all-time favourite movies list.

I will say though that Mad Max: Fury Road most certainly is; in fact I think it’s a work of insane genius and one of the most original and exciting films in years.

I’m not sure it will be for everyone as it is also one of the weirdest movies I’ve seen for some time; to me that’s only a plus as it makes it stand out in a crowd of watered down, family friendly features.

I’ve heard a few people ask, can someone who is unfamiliar with the other movies in the series see this one without having to refer back and I can safely say that yes, it completely works as a standalone movie.

Fury Road takes place in a fiery obscenity of a future and at times even has flashes of a Salvador Dali painting with some truly surreal visuals that will stick with you long after watching.

This is the first truly great film of 2015 and I’d be surprised if anything can come close in terms of sheer spectacle for the rest of the year.

The action is truly jaw-dropping with too many classic scenes to mention; I think the sandstorm sequence was a personal favourite but the entire film was just something we haven’t seen before, despite being part of an existing series. You can see everything perfectly and there is no shaky cam and minimal CGI so this really is everything you could hope for.

It has the best vehicular carnage you’ll see for many years and despite not having Mel Gibson return as Max, it still very much has the same feel as the other Mad Max films… just on a much larger scale.

Now on to Tom Hardy as Max; I will always prefer Mel Gibson in the role as he very much made it iconic but Hardy does a damn fine job and brings his own jittery intensity to proceedings. With his constant hallucinations and unpredictable behaviour, this Max truly is mad.

It would have been cool if Gibson showed up even in a cameo but sadly he doesn’t; maybe he will in the next one, which I’m sure will come soon.

He has to be to survive in this nightmarish future facing off against such villains as Immortan Joe who is going to become one of the all-time great movie nemeses. His growling voice and frankly terrifying facemask make him something out of your worst fears as he is a complete monster.

Keep your eyes open for a character called The Prime Imperator played by one Richard Norton; it was great to see him in such a huge film especially since he starred in the 90’s Mad Max clone Equalizer 2000.

Charlize Theron could nearly have her own spin-off movie as Furiosa who is a fantastic character and with everyone saying there aren’t enough female action heroes; well this is one for the ages. She nearly steals Max’s thunder at points but there is no doubt that this is his show.

The music is genuinely epic and is only amplified by the visuals of the guitarist with a flame-thrower who provides his own score to the movie.

There is the odd disturbing moment too with some memorable scenes of violence but the majority of it happens just off screen leaving the worst of it to your imagination.

Is it a perfect movie? No, there is a slight pacing lull in the middle but that’s for things like character development and story so you’ll never be bored.

Overall, I don’t really want to say anything else and spoil the story but if you’ve been waiting for a big budget, R Rated action spectacular then it’s finally here. So go out and support it and don’t let that Pitch Perfect 2 nonsense beat it to number 1.