Often mocked and yet still idolized, Keanu is one cool yet welcome talent to us Action genre fans regardless of what some think! He might be limited in some aspects (such as accents) and bad at other things (singing for one!) but he knows how to play likeable, fascinating and charismatic protagonists when the time is right so let’s go ahead and display his 10 best genre outings, shall we?

A familiar premise (matching synthetic mind with a biological brain gimmick, that is), Keanu looks right at home having done cyberpunk type material like this before. The film isn’t perfect but it’s well thought-out while being engaging at all times. It’s not the most mainstream film in the world but it’s a hardcore sci-fi lovers’ dream, that’s for sure. Reeves gets to play a family man here but instead of being weepy or over-dramatic, he plays a reserved yet caring scientist- which is just how anyone like him should play this role!

Nonetheless, he gets to do different types of robotics, hacking and researching but it’s hardly a repeat of his earlier films. If anything, those were the audition tapes to take on a different routine inspired by said earlier routine. Formulaic it isn’t but exciting, intense and well-done it is!

Despite shoddy moments at times (getting the lifeless female lead from Pacific Rim was definitely a mistake!), the film overall isn’t half-bad East meets West material. It’s got far more going for it than other recent efforts like Siberia (that’s another story for another time!) but this one, despite there being an in-name sequel on the way and a box office bomb thanks to negative word of mouth and studio interference, still delivers the ass-kicking it promises while nothing more (CinemaScore gave this a B+ rating for a reason, pals!).

Despite the missteps, Keanu still convinces and it’s great seeing him in this kind of ancient samurai dynasty period piece while playing off of genre veterans Hiroyuki Sanada (The Last Samurai) and Cary-Hiroyuki Tagawa (Mortal Kombat). Keanu might not be in the sequel but it wouldn’t hurt as he was the best at interpreting this type of mystical hero.

Directed by Reeves as well, this is an intriguing double duty display of talent. It could’ve easily been a sequel to Best of the Best or been a Hong Kong remake of The Running Man but it instead opts for more mystery with constant fighting prep. Including his Hong Kong superstar cast of Karen Mok and Simon Yam as detectives well as The Raid’s Iko Uwais and Matrix trilogy’s Tiger Chen as the unwilling participants, Keanu still gets to counter them as the antagonist who set up this illegal tournament.

Undercover FBI Agent Johnny Utah, need I really say more? Yes, Patrick Swayze was well-cast as the charming yet deadly villain Bodhi but Reeves was icing on the cake. I’ll never rank it among the Top 5 characters but it’s up there somewhere regardless because of both the uncanny undercover cop and robbery tropes really hitting home in terms of the exciting tension and sweat-inducing atmosphere. Both lead stars were game for playing these unusual yet fascinating portrayals and the film wisely begins and ends with eye-catching stunt sequences- all which is unlike what any of today’s blockbusters are rarely up to the challenge of pulling off it seems. 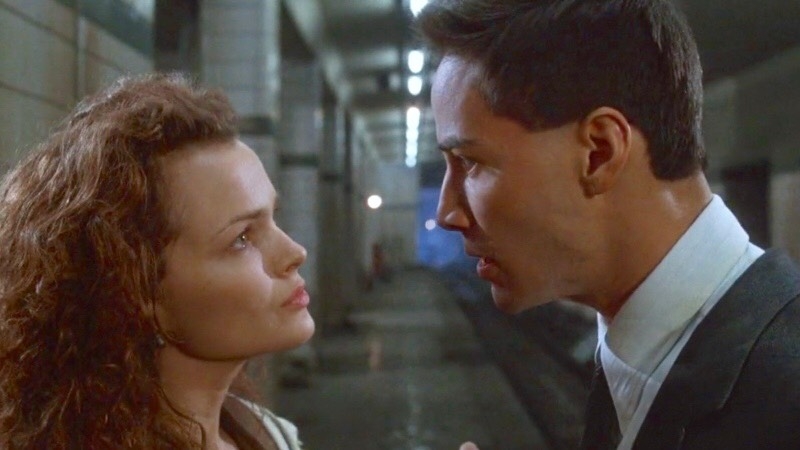 Hold on a sec- I said the uncut version which you can get as a German Region A Blu-ray disc and it’s worth tracking down, expensive as it is (if not sorting through the interwebs, whatever your true preference). You watch the original producer’s cut/theatrical film, you get William Shatner-level acting but if you watch the intended version, you get a far more foul-mouthed yet intriguing Blade Runner type career criminal on the run from the futuristic Yakuza and other corporate entities who want information digitally stored inside his head.

Keanu has probably the third best female lead (Dare I say? Yes, I absolutely do!) with co-star Dina Meyer here and his technobabble is fascinating instead of boring or serving as cheap exposition. Some saw this as only an odd precursor to his later Matrix roles but dammit, it deserves to be appreciated as its own vehicle. 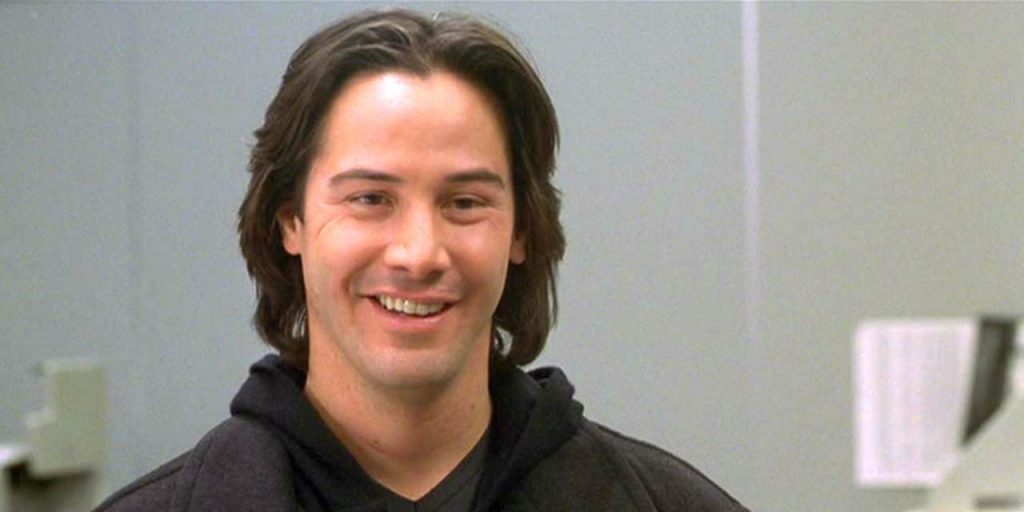 A rather neat serial killer villain role for Keanu, this Se7en/Silence of the Lambs type film actually ends up being rather interesting instead of feeling low-rent and uninspired. Way stylish, explosive and not even a role that Keanu wanted to take on originally, it still pulls off another uncanny cat-and-mouse thrill ride. Aside from being one of his rare antagonist roles, Reeves gets to dive into displaying the disturbed individual’s games, traps and targets without feeling like a walking cartoon character. It’s not earth-shattering but out of all the serial killer films of the ’00s, you’ll find much appreciation for this genre entry these days. 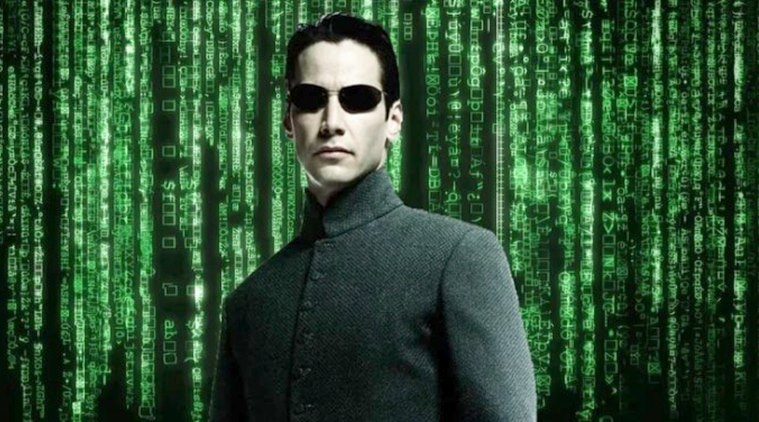 We can debate all day about if the sequels have merit but at the end of the day, we can still be impressed by the original film from ’99. One of the first few R rated films I saw on cable television, it and the first two Terminators quickly became my favorite action-sci-fi mash-ups as well as a perfect display of stylish shoot-outs and creative martial arts. Yes, it’s heavily inspired by everything from psychological thrillers to cyberpunk films/books to various manga and anime. However, if you can handle Quentin Tarantino putting everything he watches and loves in a blender to form the basis of every film he creates, you can live and let die with this winner of a film. It altogether still flows rather well, isn’t dated (how could it be as it’s a virtual reality representation of the world?) and manages to mix in so many lovely styles like Neo-Noir, post-apocalyptic and even “fugitive on the run” thriller.

Tom Ludlow, another underrated yet easy-to-name protagonist. An anti-hero turned hero, Tom is an LAPD detective who works for a crooked police squad. Much like David Ayer’s earlier works like Training Day, Dark Blue and SWAT, it’s fascinating seeing Keanu and co. in rather unrecognizable roles while also being very layered in its mystery as well as creatie in its shoot-outs. Much like co-writer James Ellroy’s L.A. Confidential, it does manage to insert other backstory, subplots and other aspects that form its own identity. I also dig how, in addition to doing its own take on the good cops vs. bad cops premise, that it also tackles the hood subgenre with some of the most compelling supporting characters- some that could easily rival the likes of Colors, Boyz N the Hood and Dead Presidents in some cases.

Reeves is deadly here and does all of that on time while doing a mix of slug fights and trigger calculating but he also does get to evolve as a performer here. That’s fine that he’s not gonna win awards- he still did what we fans wanted him to do and more. His dry one-liners, laid-back yet serious vibe and haunted backstory were so straight to the point but well displayed. 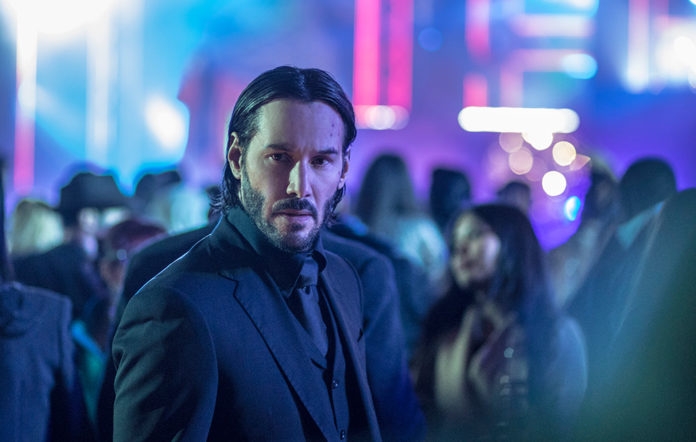 Another cited comeback role for him but while we can debate on which is the best installment, I’m going to at least bill this up here higher thanks to the dark humor, home invasion opening, nightclub assault, church ambush, car stunts and finale. It’s all impressive and saying it’s made with love is just an understatement. This is a movie made by film people for filmbuffs while still being its own special world. Comparisons to everything from Sin City and Leon the Professional to anything of the works of Park-Chan wook and Quentin Tarantino are inevitable but not a bad thing. Every good film needs some inspiration but the ones that stand out are the ones that build on it like this trophy did!

Much like any Action classic, this is one that has dated well and always worth revisiting each time it’s on the tele or you’re tempted to test out your home theater system. Saying you’re only going to watch just one scene is a straight up lie as it’s easy to get sucked into it right away as the intensity is relentlessly addicting. Why does this get number one placement, especially when Sandra Bullock’s Annie is so witty and Dennis Hopper is batshit awesome as the mad bomber Howard Payne? Because the only thing more memorable than the rigged, out-of-control passenger bus and the “Pop quiz, hotshot!” line is the main character named Jack Traven, that’s freaking why!

By this point, Keanu is finally able to show that he could mix in physical acting with wit (and even foul retorts) but it still plays well to the screen still to this day. Other people were optioned for this film but he was the right one to both not steal the film away from it’s creative premise while also finding his hero’s main identity. In a perfect world, this character shares the exact same universe as Die Hard’s John McClane and 24’s Jack Bauer but for now, we’ll have to settle for relieving this special gem every decade while introducing it to the next-of-kin!

Need another favorite star’s resume ranked here? Give a shout-out! Thank you as well for reading and comments are appreciated.