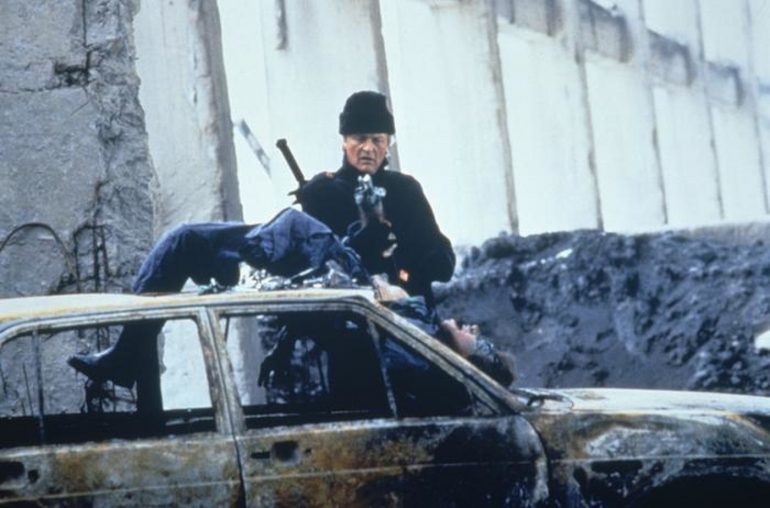 Omega Doom has some imaginative ideas, Rutger Hauer being awesome, good third act and super-loud guns bu it has a rather slow-paced first hour and can get a little boring at times.

Plot: In a world controlled by robots, Omega Doom, a cyborg suffers a blow to his head and loses his evil circuitry. Now, he is convinced to help the planet’s few remaining human beings regain control.

Review: In a nuclear winter resulting from a robot takeover of earth, only droids survive. In fear of a rumored human resurgence, the droids search for a hidden cache of weapons to use against them. One robot called Omega Doom (Rutger Hauer), his evil circuits destroyed during the war, enters a small town where a robot civil war is taking place. He tries to convince both sides to join forces in search of the weapons, all the while having a hidden agenda.

Directed by action stalwart Albert Pyun, Omega Doom is yet another take on Akira Kurosawa’s Yojimbo, but robot apocalypse edition. Unfortunately, all of the robots (with rare exception) are human looking with some unusually hot women walking around in drapey clothes. Hauer gives a good steely performance as the titular Omega Doom, being a general bad-ass who kills robots he doesn’t like with an unusually noisy, over-dramatic gun (you really have to see how this thing shoots – it’s hilarious!).

I found the first hour to be fairly boring with drab, grey, bombed-out sets and robots standing around sizing each other up and talking in low murmurs. But the last half-hour has some high-paced action as Hauer takes on the rival gangs and robots fling themselves through the air, twist around impossibly while fighting, and fire more of those over-the-top guns.

Omega Doom gets a bad rep for being terrible, but it’s got Rutger Hauer in it, some neat imaginative ideas to help the movie along and some terrific robot vs. robot fighting action toward the end.