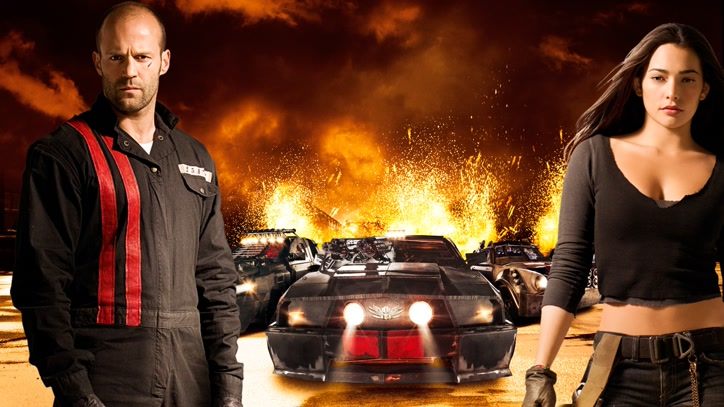 Remake.  It’s a very dirty word for film fans everywhere.  I don’t mind it so much, as, let’s be honest, it’s become a film type all its own.

Now, everyone will tell you that the original is always better.  That’s not entirely true.  I can name many films where the remake is better.  The Fly, The Thing and Death Race.  Yes I said it, Death Race.  Sure Death Race 2000 is a classic, sure everyone loves it, sure it’s fun, but you know what it’s not?  Half as good as the remake.

The original stars fan favorite David Carradine and the man himself Sly Stallone.  It’s about a cross country race where you basically race to the death.  Running over people gets you bonus points.

The cars are all weird looking as well.  By weird I mean cheap.  It’s fun, and I’m also sure you’ve seen it so I won’t bore you with the plot details, even though I basically summed it up already.

The remake stars Jason Statham, so already it’s better by default.  The Stath plays a former race car driver framed for murder so he can be sent off to a prison where they hold races to the death.

Cars, which are much, much cooler than the original are equipped with weapons varying from your standard bullets, to napalm, ejecting tombstones, rockets, the whole nine yards.  You race in 3 stages and basically kill everyone in your path.

Whereas the original only had action, which was cartoon-like at best in the race scenes, this one has The Stath beating people down in the prison as well.

So, you have good old fashioned fist fighting and vehicular homicide.  Throw in a smoking hot chick, and the great Tyrese and you’re set.  The racing is much more polished and a ton more exciting than watching cheap kit cars driving around.  I mean Tyrese drives a modded out truck complete with machine guns and a rocket launcher.

The Stath drives a fastback Mustang, and in one scene, he drives it backwards so he can riddle someone with bullets.

This remake succeeds where a lot have failed because it retold the story and hipped it up a bit for modern times, so to speak.  Throw in a decent budget and of course the Stath and you have a winner in every sense of the word.

I’ve said it before; I’ll say it again, take a flawed film (Like Death Race 2000) and just improve it.  And you know the best way to improve something?  Add the Stath… and maybe Collin Farrell.  I also really enjoyed the Total Recall remake.  But not more than Arnold’s, just to be clear.