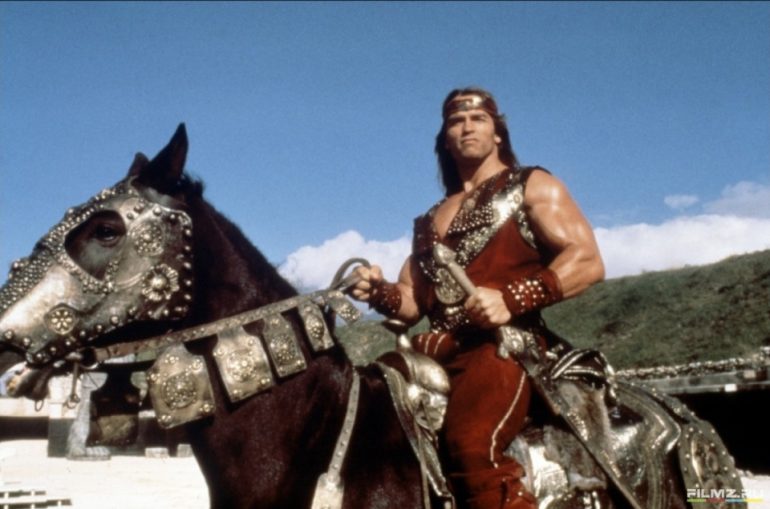 Red Sonja is embarrassingly bad in places with some terrible performances, but it does have a few decent action scenes. If you want a real sword and sorcery flick though, go watch Arnold’s Conan movies.

Plot: A vengeful woman sets out to retrieve a magic orb from an evil queen whom she vows vengeance upon after the evil queen slain her family and her loyal warriors raped her.

Arnold unsurprisingly steals the movie as Kalidor, who is really more of a sidekick, but Sonja would be pretty screwed without his help. He disappears for about half of the movie and when he isn’t on-screen it’s pretty dull.

The weakest link of the film is Prince Tarn (Ernie Reyes Jr.) who is incredibly annoying and you really want him to die; thankfully his servant Falcon (Paul L. Smith) is very likable with a quiet nobility.

You may recognize the main villain; in Conan the Barbarian, Sandahl Bergman played Valeria who was the love of Conan’s life, but in this movie she plays Queen Gedren. I can’t decide who is worse in this movie though, Nielsen or Bergman, who are both incredibly wooden.

I’m surprised this movie got a PG-13 rating as it’s not very subtle about her being raped; it’s not exactly a kid’s movie but with the annoying supporting cast, it’s not exactly targeted at adults either.

It does feel kind of like a Conan movie and even takes place in the same universe but it just isn’t as well done.

The script is clunky and forgettable and even Arnie doesn’t have any memorable lines.

It is quite well paced and at under 90 minutes it really flew by; there is plenty of action with some impressive sword fights too. That is pretty much all it has in its favour though.

Ennio Morricone provides the score which is surprisingly forgettable and not one of his best.

Overall, Red Sonja is embarrassingly bad in places with some terrible performances, but it does have a few decent action scenes. If you want a real sword and sorcery flick though, go watch Arnold’s Conan movies.