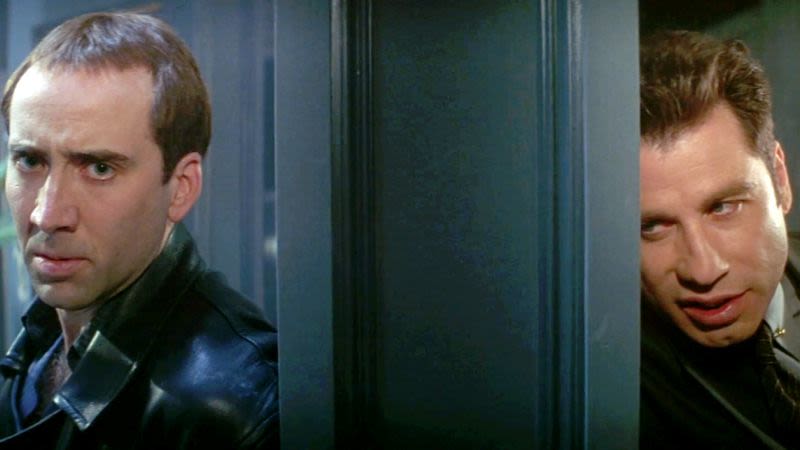 Face/Off is another movie I could have sworn I’d reviewed on the site but I think it must have been lost in the great site crash of 2017 so it’s time for a revisit of this John Woo classic. Although Hard Boiled remains Woo’s ultimate masterpiece (for me) I think that Face/Off is arguably his best Western feature to date.

Nic Cage and John Travolta are on vintage form as a cop and terrorist who swap identities; after putting him in a coma after a spectacular airport shoot-out Sean Archer (Travolta) needs to become Castor Troy (Cage) so he can find a bomb he has planted in L.A. and stop it from killing a lot of innocent people. Archer goes undercover into prison and assumes Troy’s identity… then Troy wakes up from his coma and all Hell breaks loose.

Face/Off was always a ridiculous concept and can be hard to swallow but if you just go with it then it remains one of the best action movies of the 90’s. It has John Woo’s trademark style galore with Mexican stand-offs, religious symbolism, double gunplay, slow motion and of course doves.

Both Travolta and Cage give their absolute all in this movie and I hate to see them both now mostly starring in straight to VOD dreck when they can be THIS good.

Nic Cage gets to do his over the top bit which he has made his own especially in the “Hallelujah” scene but when Cage becomes Archer he gives one of his best performances to date. He is just in the seventh circle of Hell; he is put in prison, his nemesis shacks up with his wife and his life generally goes down the toilet. Since the death on his son at the hands of Troy, Archer is utterly bereft and essentially ignores his family as he obsesses with taking down Troy. When he assumes his identity and escapes from prison Archer (disguised as Troy) befriends Troy’s son and essentially learns what it is to be a father again. Troy takes over Archer’s life and becomes a better father than Archer has been as he takes an interest in his daughter’s life even protecting her from a potential rapist at one point.

There are all sorts of interesting dynamics in the story and it isn’t just action for the sake of it; but let’s just talk about the action shall we? Face/Off has a scale we just don’t see in modern movies (without CGI). The speedboat chase, the plane crashing into the hanger and the various shoot-outs are genuinely spectacular and are what make the movie stand out as a classic of the genre. Interesting Tidbit: If you keep your eyes open during the opening hanger scene you can see one of the stuntmen on a wire as he is pulled back after being shot which always took me out of the scene a little but it’s only a minor quibble.

The music score has a fabulous theme courtesy of John Powell which can sound sad one minute and exciting the next, working perfectly in moving the story and action along.

Overall, Face/Off remains one of my favourite movies and one of John Woo’s absolute best; the action is out of this world, the story is gripping (despite the silliness) and the cast are at the top of their game. A classic!