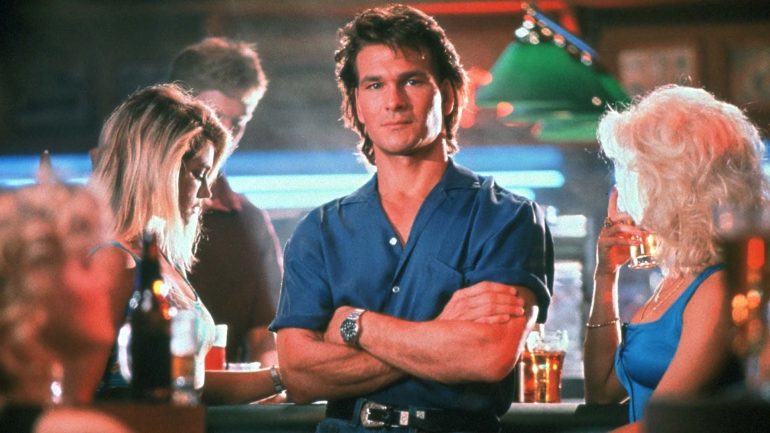 If you haven’t seen Road House, then you’re missing one of the best (and cheesiest) action movies of the 80’s with plenty of fights and nudity to keep action fans happy.

Plot: A tough bouncer called Dalton is hired to tame a dirty bar.

Review: Everyone knows this movie is a bit of a classic; is it cheesy? You betcha! But it also has Patrick Swayze on legendary badass form with a little help from another legend: Sam Elliott, who just so happens to be one of my favourite actors of all time. He has that awesome drawl, epic mustache and no matter what kind of character he plays, he comes across as wise.

The story is straightforward enough with Swayze playing Dalton, the best Bouncer in the business; hired to clean up a dive bar called the Double Deuce located in the ass-end of nowhere. Unfortunately for Dalton, local tycoon Brad Wesley (Ben Gazzara) kinda likes things the way they are… under his control. So things don’t go smoothly for our boy. This doesn’t prevent him from beating up everybody in the entire town which ends up with a showdown at Wesley’s compound.

Road House has everything any self-respecting action fan could want: fight scenes, gratuitous nudity, a likable lead and a great villain. This is arguably my favourite Swayze movie aside from Point Break.

Dalton doesn’t like to use violence and his goal is to “be nice” and only use force if necessary. In the Double Deuce it’s necessary every night as he quickly discovers. You are totally rooting for Dalton and Swayze plays him as a normal guy, not some one man army… except he really is. He lives in essentially a dirty shed and does Tai Chi to keep focused and maintain his badassery.

The final 20 minutes has some great action with Dalton having a one on one with the main henchman… whose name I can’t remember. Anyway, it has such great dialogue like “I used to f**k guys like you in prison” before said guy gets his throat ripped out by Dalton at the end.

The whole movie is just one bar fight after another and as everyone knows, every decent action movie requires a bar fight. The bad guys are fabulously scummy and every beating is utterly satisfying.

It’s even quite emotional in places; I think we can all agree that when Sam Elliott gets killed we have a tear in the eye. You don’t kill Sam, you just don’t!

The movie also gets props for using late great singer Jeff Healey as the musical entertainment in the Deuce.

Overall, if you haven’t seen Road House, then you’re missing one of the best (and cheesiest) action movies of the 80’s with plenty of fights and nudity to keep action fans happy.