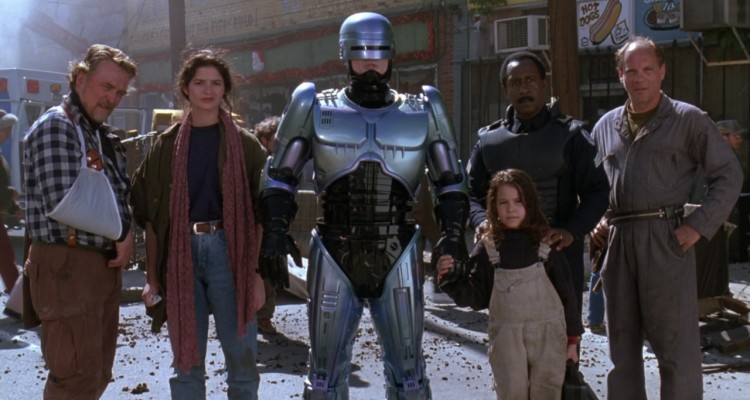 RoboCop 3 is almost so bad it’s good but really it’s just plain bad because you can almost hear the studio execs’ conversation on how to water it down for a family audience. They failed miserably.

Plot: Robocop saves the day once more. This time the half man/half robot takes on ruthless developers who want to evict some people on “their” land.

Review: If you want to know how to completely kill a franchise, this is how you do it. You remove all of the satire, wit, violence, intelligence and great dialogue from the film; then you add an annoying smart ass kid, a PG-13 rating, a poorly animated jet-pack scene (which is beyond lame) and there you have it, franchise ended. Well played, guys.

RoboCop 3 does maintain a few of the original cast members including Nancy Allen who clearly read the script beforehand and decided the wisest thing was to jump out of this sinking ship. Her character Lewis is killed off after a few minutes of screen time but she’s not the only one who leaves. Gone is Peter Weller, the man who embodied RoboCop so perfectly; now he’s played by Robert Burke who isn’t that bad in the role, but he lacks the emotion that Weller brought to it.

The script is overall pretty ropey too, with no memorable dialogue. Any subtlety regarding Capitalism from the first film is long since gone and it’s so blatantly in your face with it’s anti-big business message which I got tired of a long time ago.

Good points? Basil Poledouris is back doing the score so we have a return to the original awesome themes from the first film. It’s also well paced and pleasingly short with plenty of action.

Overall, RoboCop 3 is almost so bad it’s good but really it’s just plain bad because you can almost hear the studio execs’ conversation on how to water it down for a family audience. They failed miserably.