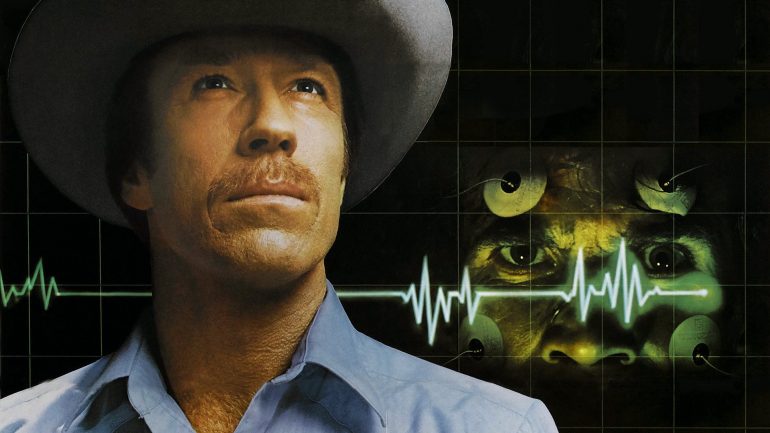 Silent Rage is something a bit different for Chuck Norris and despite feeling rather familiar and a slow pace in the first half, the second half really picks up and becomes pretty tense.

Plot: Dan Stevens is the sheriff of a small Texas town who checks out a disturbance which turns to murder. The killer is still in the house and he tries to kill Dan, but Dan stops him and arrests him. The killer attempts to flee, but is shot and killed and is taken to a medical institute. Three doctors, led by Dr. Philip Spires, operates on the killer and brings him back to life using a formula that the three doctors made and the killer is made indestructible. Dr. Tom Halman tries to terminate the killer, but he and his wife are killed. After the two remaining doctors are killed, the killer goes after Dr. Halman’s sister Alison, and it’s up to Sheriff Dan Stevens to stop him.

Review: I’d heard this movie was pretty bad but I gotta say I’ve seen plenty worse than Silent Rage; it is a mixture of several other movies, but it mostly reminds me of Halloween. With all the POV shots, the sparse soundtrack and there are certain scenes which are just plain stolen (Namely the chick finding the dead bodies in her bedroom).

It’s really more of a horror movie than the usual Norris flavoured actioner but it gets props for being really different. I’d love to say it’s a rip-off of Terminator but this was out 2 years before it.

It’s a bit slow in the first half and there aren’t any big action scenes aside from a pretty awesome bar fight where Chuck beats up a bunch redneck bikers, which is thoroughly satisfying. Chuck also has a big fight with the bad guy at the end but it’s nothing flashy; it’s more of a fight for survival rather than martial arts.

The best thing about the film is the late, great Ron Silver (Timecop) as a scientist with a conscience who tries to prevent his fellow doctors from creating the ultimate killing machine… they don’t listen.

It gets quite tense in the second half and doesn’t spare the bodycount either.

Overall, Silent Rage is something a bit different for Chuck Norris and despite feeling rather familiar and a slow pace in the first half, the second half really picks up and becomes pretty tense.