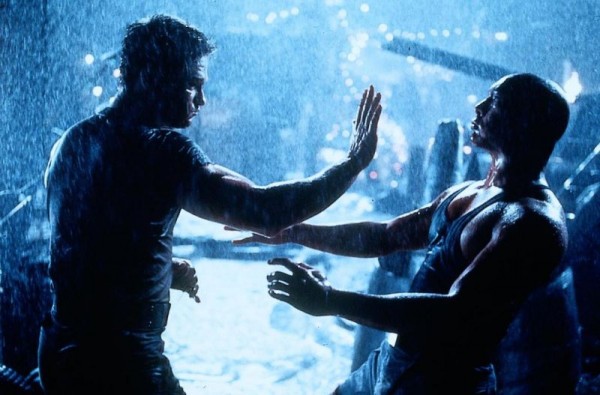 Soldier doesn’t waste time with silly things like character development; it’s essentially just an excuse for Kurt to blow the Hell out of nameless goons and beat people up. You had me at One Man Army.

Plot: A soldier is dumped on a waste disposal planet and lives among a community of crash survivors on the planet and takes it upon himself to defend his new home when genetic engineered soldiers are ordered to eliminate the crash survivors.

Review: I know Soldier is widely derided by a lot of people but I personally have always thoroughly enjoyed it; why? Well, Kurt Russell is unbelievably badass in it and it’s essentially a sci-fi One Man Army movie.

He doesn’t say much so we don’t get to see him display his trademark wit but he’s arguably at his physical peak in this movie. Excellent fights and some great training scenes show that even when he was in his 40’s, Russell could kick ass like the best of them. For the record your 40’s isn’t that old, I’m 36 so… yeah.

Anyway, the final 30 odd minutes is action nirvana with Russell blowing the crap out of multiple enemies and then it climaxes with an awesome fight scene between Russell and Jason Scott Lee. I’m disappointed Lee never became a huge star after his excellent turn in Dragon: The Bruce Lee Story; he oozed charisma and had great presence.

It was good to see him Hawaii Five-0 recently though, so hopefully he will get some bigger roles soon.

He’s on villain duties this time and he (like Russell) is essentially a Universal Soldier, trained to kill without question. He doesn’t really get to do that much apart from look mean and eventually fight Kurt but when he’s on screen, he’s a tough sonofabitch.

Jason Isaacs is always fun to watch but you’ve also got Captain Crazy himself Gary Busey to provide some insanity which automatically gives the movie and extra star.

The visuals are pretty impressive and I love the look of the junk world where Kurt is abandoned by his makers. The score was militaristic and exciting enough to keep the action fresh too; although it’s not that memorable it certainly did the job.

It moves along at a good pace and despite lacking any real originality, it has some likeable supporting players including Connie Nielsen and Sean Pertwee.

Overall, Soldier doesn’t waste time with silly things like character development; it’s essentially just an excuse for Kurt to blow the Hell out of nameless goons and beat people up. You had me at One Man Army.