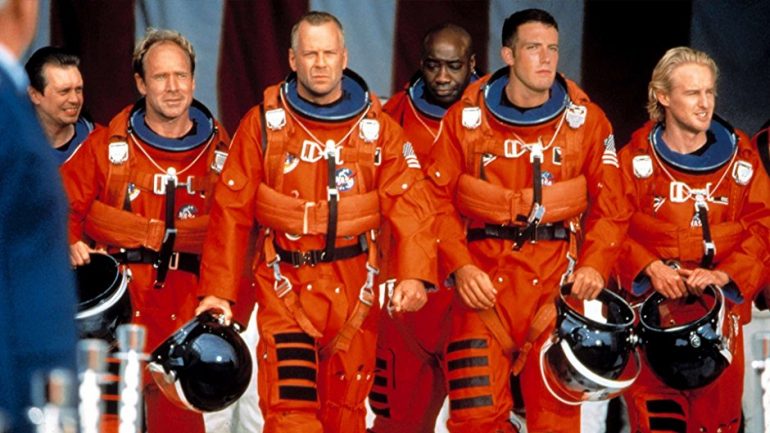 There’s plenty of humour (even if it isn’t always intentional) and there are some spectacular visual effects/action sequences.

Trevor Rabin provides one of his most epically heroic sounding scores which will have you walking in slow motion and saluting the American flag… even if you aren’t American.

There is genuine spectacle, including meteors hitting New York and the destruction of Paris with jaw dropping visuals.

It’s also quite moving (almost), especially during the finale with Bruce’s super heroic self-sacrifice for the good of mankind.

There’s some fun banter and the training sequences before the crew go into space has plenty of laughs.

I remember the first time I saw that I was like, ah yes, nothing like a bit of… domestic… abuse… so yeah, not sure what that was all about and it felt really out of place.

Anyway, it’s utterly ridiculous and a lot of the science is nonsense but it’s a Michael Bay movie; court is adjourned.

In fact, I haven’t watched it for a while and may stick it on this weekend. So there you have it, I like Armageddon… I don’t love it, but it’s good fun.

I still hate that Aerosmith song though.