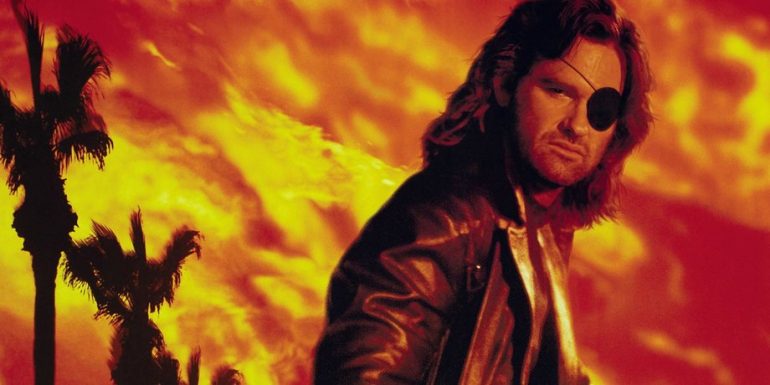 This is going to be a regular feature on the site where we give our reasons for liking a movie that nobody else likes. This week it’s the much maligned sequel to Escape from New York starring Kurt Russell: Escape from LA.

Now you can argue all you want but Kurt Russell as Snake Plissken is one of the coolest movie characters of all time; his eye patch, long hair and gravelly voice just screams “bad ass” without coming off as overly cheesy. Russell still kicks ass in this movie where hard ass Snake Plissken is once again called in by the United States government to recover a potential doomsday device from Los Angeles, now an autonomous island where undesirables are deported.

Snake’s outfit in this movie is rad; he’s got the long leather jacket, still maintains the long hair and his don’t give a shit attitude is so refreshing. He’s an angry loner type who likes to do things his way or no way and that’s my favourite type of character.

You’ve also got John Carpenter & Shirley Walker’s amazing music score which is sort of a modern Western theme with electric guitars and just an all round cool vibe. It also has a memorable theme tune which is another point in its favour.

The basketball scene is a lotta fun and hearkens back to the original movie in terms of the slightly odd tone. There is some impressive action and the only real fault with the movie is the awful special effects. They’re not bad enough though to ruin an otherwise entertaining action movie.

Carpenter creates interesting characters and this movie is not without some nice satire too.

There has been talk over the past few years about a potential remake of Escape from New York , which I’m afraid will never get my endorsement as Kurt Russell is Snake just like Bruce Willis is John McClane. There is no one who could play him as cool as Russell and Carpenter’s direction always deserves mad props. So rather than a remake, how about a third movie???

So Sue Me!  Despite the crappy special effects I still have a special place in my heart for Escape From LA and if you don’t then I guess I’ll see your ass in court.