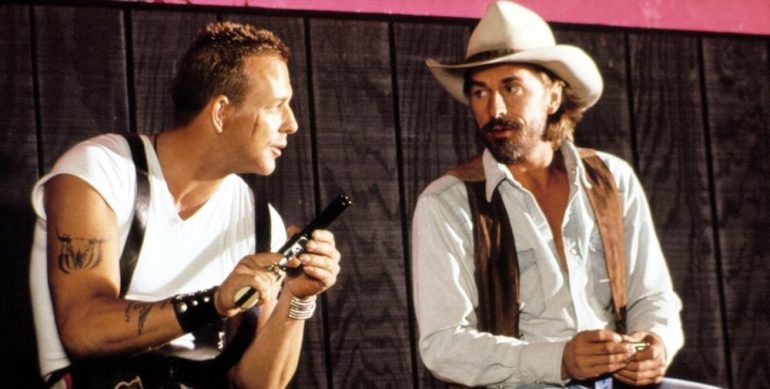 Sue Me! I Like Harley Davidson and the Marlboro Man

Sitting at 22% on Rotten Tomatoes Harley Davidson and the Marlboro Man got dumped on by critics when it was released way back in 1991 but was also a commercial bomb but I think over the years it has garnered somewhat of a cult following with action fans.

It had been a while since I’d watched it and forgot what a good time it was; yeah, some of the dialogue is a little lame but this movie is essentially the ultimate male fantasy. We’ve got two Robin Hood style modern day cowboys who live life a day at a time with no attachments, but they look cool, bang lots of hot chicks, ride around on motorcycles and get into bar fights on a regular basis.

Mickey Rourke himself actually hates the movie stating in an interview he did once with Alec Baldwin on his podcast “This piece of shit fell in my plate and they offered me a boatload of money. And like a whore I took the $4 million or whatever it was and bought a big fucking Elvis Presley house that I couldn’t afford. And I remember doing this film and hating myself every day.”

Rather harsh as Rourke has rarely been cooler than he was in this and no matter the flaws I personally love it. There is buddy banter aplenty with Don Johnson’s Marlboro (or Robert Edison as the character’s real name is) regularly stating how his old man would impart various words of wisdom “before he left this shitty world” and Mickey Rourke’s Harley generally just smoking while also being cool. I like the running gag that Harley can’t shoot worth a shit and always misses the bad guys.

Side note: I only noticed on this viewing a little inside joke with a billboard in the background for Die Hardest: Die Hard V.

Directed by Simon Wincer (The Phantom) and written and produced by Don Michael Paul (who would direct Sniper: Ghost Shooter, Sniper: Legacy and several other straight to video gems) there isn’t any particular sense of urgency to the plot but the gist of it is two lifelong buddies decide to rob a bank’s armoured car due to the imminent foreclosure of their friend’s bar, not knowing that its cargo is not money but a new street drug.

It opens with Harley (Rourke) waking up next to a naked woman, walking out on her and driving off on his bike with Bon Jovi’s Wanted Dead or Alive playing over the top of it immediately giving off a Western feel.

On villain duties is a young Tom Sizemore but also Daniel Baldwin who (along with the rest of the henchmen) wear long leather jackets made of Kevlar making them bulletproof; it’s such a wonderfully ridiculous idea that just makes me love the movie even more.

There are a lot of recognisable faces in this movie too including Kelly Hu, Tia Carrera, Sven Ole-Thorsen, Robert Ginty, Giancarlo Esposito and Vanessa Williams.

There is no shortage of action with regular fights, shoot-outs and impressive stunts but my favourite moments of this film all take place in the airplane graveyard which for some reason I find otherworldly and would love to visit it someday.

Basil Poledouris provides the score which is filled with twanging guitars and synth; it’s fine but admittedly not one of his best.

After all these years I still have a place in my heart for this movie so Sue Me! I love Harley Davidson and the Marlboro Man and if you don’t then I guess I’ll see your ass in court.