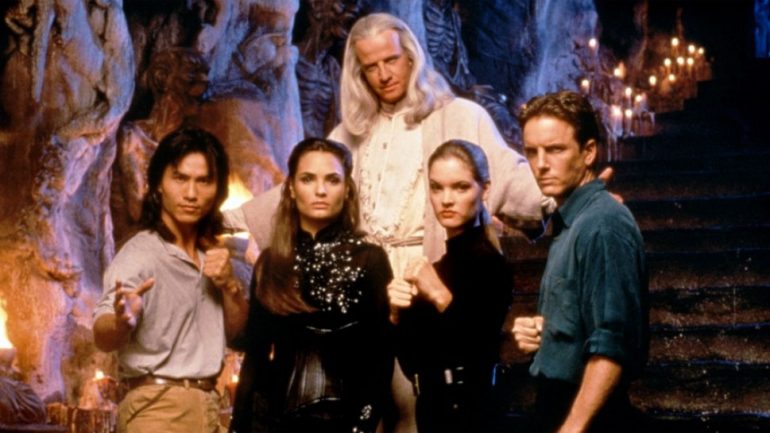 Video games are rarely successful when they are adapted to the big screen; however, despite all its flaws one of my personal favourites is Mortal Kombat from 1995.

Directed by Paul W.S. Anderson Mortal Kombat was quite cheesy but it was a heck of a lot of fun with a cast that included Cary-Hiroyuki Tagawa, Christopher Lambert, Robin Shou, Trevor Goddard (RIP) and Linden Ashby.

A lot of the acting isn’t exactly amazing but when dealing with something this daft you’re not really expecting Shakespeare. The story is straightforward and just sticks to lots of fighting with little in the way of pesky things like characterization or depth.

Cary-Hiroyuki Tagawa steals the show though as Shang Tsung; he manages to keep a straight face and says all of the iconic lines from the game with glee and really was born for the role.

It had the same visual aesthetic as the game with plenty of cool fight scenes and it never took itself too seriously either. The music is dated by now but who can forget the “MORTAL KOMBAT!!!” Song? In fact, I bet it’s going through your head right now. You’re welcome.

Even at the time the special effects were pretty average but I liked how Goro was done using puppetry so he’s probably the only effect that holds up today.

As fun as the movie is though I think it’s high time we got a new film with a decent budget (which we are meant to be getting) as the world of Mortal Kombat is too interesting. The Mortal Kombat: Legacy web series was an awesome reboot so even something like that given a bigger budget done in a feature length style could be something special. I would love it to be R rated so we could get full use of the FATALITIES.

Anyway, back to the 1995 movie; despite all its flaws it moves along at a brisk pace and is never dull; It’s colourful and squarely aimed at a family audience which isn’t always a bad thing. If you were to watch it for the first time now you would just laugh at it but at the time it was a blast.

I still watch it regularly and considering it’s over 20 years old it remains entertaining so Sue Me! I like Mortal Kombat and if you don’t then I guess I’ll see your ass in court. BABALITY!