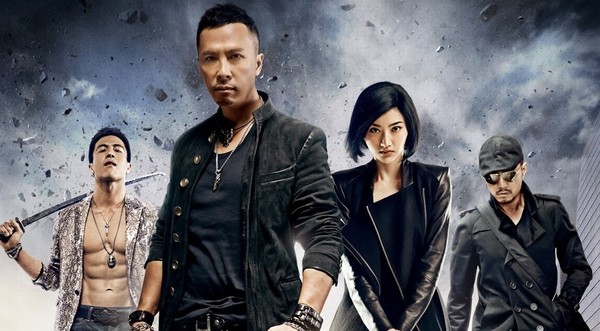 I remember when the Donnie Yen movie Special ID came out in 2013 many fans were disappointed and it didn’t get great reviews either; they weren’t terrible but it still didn’t blow people away. Yen himself says a lot of material was cut from the final movie which affected the story including the relationship between Yen and his mother. We posted this a while back when he spoke with Twitch film and he was quite open with his criticism:

“I think in many areas of the film, it could be a lot more solid.  This film – I was also the producer – went through many, many problems, many obstacles.  It’s very difficult to put a film together nowadays, especially with these types of subjects.

As China is a very powerful growing market for filmmaking and we’re talking advantage of it; especially for someone like myself who was based in Hong Kong filmmaking, this type of material with violence and gangsters and undercover cops, it’s quite sensitive in China.  The bright side is the policy is opening up.  There’s quite a few swearing in Cantonese in this film and this is something that I thought that they would be cut out, but they embraced it.  It allows artists like myself to be artistic on that level and you can feel that’s where the future is going.  But at the same time, there’s a lot of areas where they can be more professional about it, they cut out a couple of scenes here and there.  I think the overall story would be a lot better if they didn’t cut it out, particularly with the development between my character and my mother.

See, that was the area where it didn’t really make sense because everybody was asking, ‘What’s up with the mother?’  I’ll tell you the backstory, I’ll tell you the stuff that they cut out was she had a problem; she had depression.  So there’s a scene where I’m having dinner and she’s just crying hysterically and I say, “What’s the matter? Whoever took advantage of you in the market, I’m gonna go and give them a whipping.”  She says, “No, I don’t know why I’m crying.”  It’s because my father left us and because of that it still comes back to her.  So I tell her “Why don’t you hang out with me?” and they go to the bar.  That’s why there’s the scenes where they’re drinking and he says, “I’m taking care of you. You think you’ve been taking care of me? I’ve been looking after you.”  Those are the scenes that they cut out, so the development of the mother and son didn’t make much sense.  So here and there I thought the whole movie overall could’ve be a lot more solid in terms of fully developing the characters.  That’s the unfortunate thing, that’s something I have to cope with.”

So, yes I agree that there are flaws with the film; the story wasn’t all that exciting but you know what was? The action; I thought it was fantastic with spectacular fight scenes which were hard hitting and brutal.

Notice in the opening fight scene Donnie never picks up a weapon even when his opponents do; tables are being smashed and there are wooden legs which could easily be used in defence but he never touches them. I liked this as it shows a code of honour where he wants to defeat his opponents with his bare hands, which of course he does.

This also comes into play during the satisfying climactic fight on the road where rather than killing his opponent (Andy On) he arrests him which felt far more realistic. There are punches, kicks and grappling and it doesn’t look overly choreographed; it’s two brawlers battling for their lives and you feel every hit.

I really liked Andy On as the villain Lo Chi-Wai / Sunny; the fact that he and Chan Chi-Lung / Dragon (Donnie Yen) were former friends added a nice bit of weight to the story; admittedly it could have explored their relationship further but in the end I thought it worked out fine.

Car stunt director Bruce Law did a phenomenal job in putting the climactic car chase together which is one of my personal favourites in recent years.

Is it as good as Flashpoint? Of course not and I even prefer Kung Fu Killer but I don’t think Special ID is anywhere near the atrocity that people have made it out to be.

So Sue me! I like Special ID and if you don’t then I guess I’ll see your ass in court.