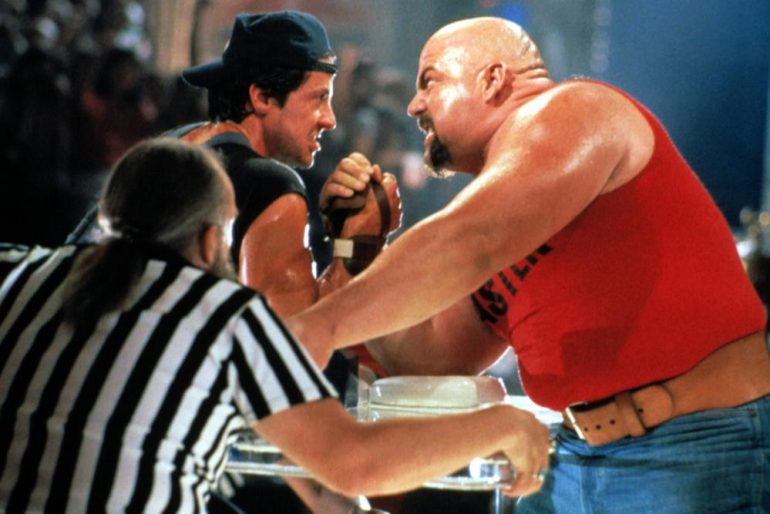 Plot: Lincoln Hawk (Stallone) is a struggling trucker who’s trying to rebuild his life. After the death of his wife, he tries to make amends with his son who he left behind years earlier. Upon their first meeting, his son doesn’t think too highly of him until he enters the nation-wide arm wrestling competition in Las Vegas.

I don’t care what anyone says, I love this movie. No one else can play the working class hero like Sly Stallone and this is one of his most underrated roles. He’s essentially a deadbeat dad who left his wife and kid behind years ago because his Father in Law (Robbert Loggia) drove the family apart. Loggia plays the stuck up, rich snob very well and pretty much as soon as he’s on screen you hate him.

Stallone has a way of making any character likable and believable; in Over the Top he’s not an invincible hero but just a man trying to make up for past mistakes with his son. Did I mention that his character is named Lincoln Hawk? That is a classic action movie name and I wish I knew more people in the real world named after action heroes. Still never met anyone called John Matrix….

Anyway, the kid in this starts off annoying as hell but then you warm to him and by the end you’re rooting for him and his dad to be reunited. You know they will do and it’s all pretty predictable but who cares? It’s 80’s feelgood fun with a winning soundtrack that includes the classic “Winner Takes It All” by Sammy Hagar.

The story is surprisingly moving, especially in the scene where his wife dies and you may have to wipe away some tears of manliness.

It may not be up there with the likes of Rocky or Rambo but Over The Top remains a fun Stallone movie with a quality soundtrack that will inspire you to think about going to the gym but then change your mind and continue watching TV.

So Sue Me! I Love Over the Top and if you don’t then I guess I’ll arm-wrestle you in court!