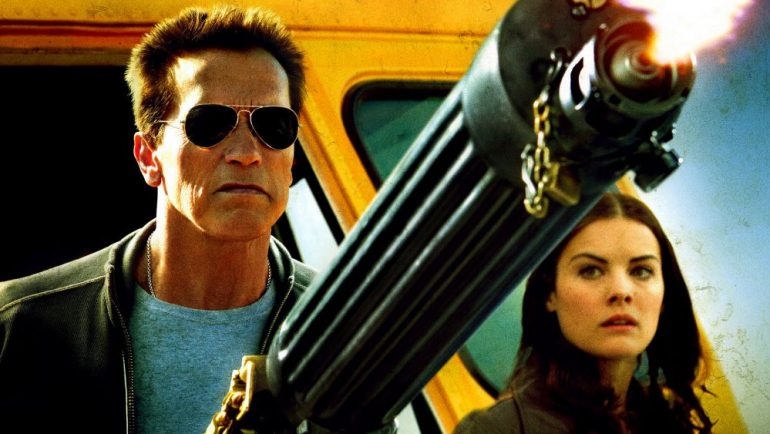 Ever since Arnie’s comeback lots of people have been saying that his movies haven’t been that great and that they have been very disappointing. I disagree and personally love Escape Plan, The Expendables movies and most of all The Last Stand; Sabotage I can take or leave though but I liked that it was something different.

I know plenty of you enjoy this movie as well but this is just to give it a bit of extra love.

What’s interesting is The Last Stand is everything an Arnie movie should be; it has plenty of humour, violence, action and a sense of fun.

It’s not like he’s pretending that he’s still 25 either; there are comments made throughout the film about how old he is and his character Sheriff Ray Owens is a man who has seen and been through a lot. Him being older is part of the story and is really what drives it.

I think they got the tone just right with enough tension and action to balance the laughs. As I said at the time of release, I’m glad that Johnny Knoxville’s character wasn’t anywhere near as annoying as was first expected from the trailers. He’s actually quite entertaining and even useful to the story.

I’m aware of the flaws and how the villain’s stolen car scenario was quite ridiculous; for example surely the cops could put the chains on the road with spikes on them… pretty sure that would slow the car down. But then that would mean there was no movie.

The movie had a real old-school 80’s action movie feel which is everything I want from an Arnie flick. It had over the top violence, old ladies with guns and bad guys being blown up with flares.

The action is nicely shot and there are several highlights; the shoot-out in the desert with the Sheriff coming in to save the day was pure action movie Nirvana.

The climactic shoot-out in the town was thoroughly satisfying and then we have the mano-a-mano fight between Sheriff Owens and the drug dealer Gabriel Cortez; it’s pretty brutal with the two men battling for survival.

I found I genuinely cared for our heroes and the fact that they were all pretty inexperienced with dealing with real crime added to the sense of threat.

Mowg’s music score is like an old-fashioned Western and the main theme is one of those ear worm tunes that sticks in your head long after hearing it.

Peter Stormare was arguably the better villain (as usual) and Eduardo Noriega was rather forgettable as Cortez but this is an Arnold Schwarzenegger action movie and doesn’t require over thinking things.

So Sue Me! I think The Last Stand is a riot and if you don’t then I guess I’ll see your ass in court!