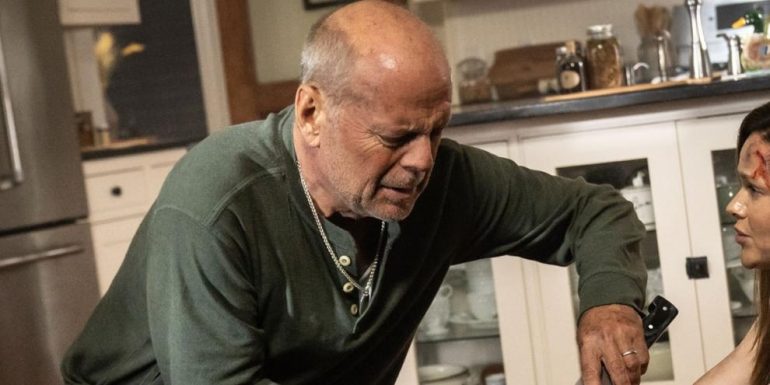 Survive the Night delivers some tension and it’s nice to see Bruce Willis show up for the entire movie but it’s a one time watch that doesn’t really stand out.

Plot: A disgraced doctor and his family are held hostage at their home by criminals on the run, when a robbery-gone-awry requires them to seek immediate medical attention.

Review: I doubt anyone gets all that excited about a new Bruce Willis movie these days as he has been faxing in his performances for the past 15 years. Survive the Night is one of his better recent efforts but even then it’s nothing spectacular.

It does at least attempt to do something a little different giving us a bit of family drama and characterization but also humanizing the villains so they aren’t just there to be hated.

Chad Michael Murray plays the disgraced doctor Rich who has moved home with his parents until he gets himself back on his feet; his dad (Bruce Willis) is a bit cantankerous and is disappointed with his son and isn’t afraid to say it. He actually shows some emotion in this and even cries, but I do hate seeing my action heroes becoming old men and Bruce looks his age in this movie.

The performances are generally decent and considering this is a straight to VOD movie it doesn’t look cheap.

The action is mostly the family fighting back against the two intruders with a car chase towards the end but as I said nothing too large scale. It’s quite tense at times but for some reason I felt it never got as edge of the seat as it could have been mostly because the family kept making stupid decisions so at times you almost root for the antagonists.

Shea Buckner is the real bad guy Jamie who definitely has a screw loose but he is at least loyal to his brother; you still don’t sympathize with him though as he is as ruthless as they come and you know it’s not going to end well for either brother.

It’s a brisk 90 minutes and it flows well but it’s the type of movie you’ll watch and forget the next day.

One of the highlights was the music score which was moody and atmospheric and helped with the tension.

Overall, Survive the Night is unremarkable but not a terrible film; Bruce Willis is actually in the entire movie and gets some action scenes but I felt it was never as intense as it could have been. Chad Michael Murray makes for a sympathetic lead and after all the crap he goes through in this movie you are rooting for him… even if the rest of the family keep doing stupid things.