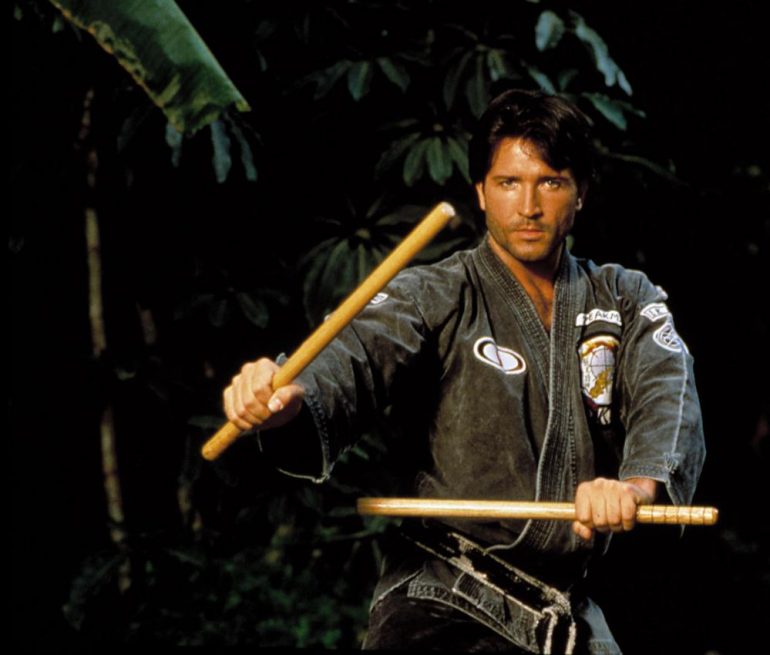 I wouldn’t be in a rush to watch The Expert; I’d recommend The Perfect Weapon instead which has plenty of action and remains Speakman’s finest hour.

Plot: Johnny’s sister is brutally attacked and murdered by a sadistic serial killer. At the trial, he is sentenced to be electrocuted, but a bleeding heart liberal has the sentence commuted to a mental facility. Here, he will interact with other model prisoners and give talks at schools while he is being treated. The only problem is that Johnny, being a ex-special forces trainer, is coming to the prison to seek his own justice and that does not include rehabilitation.

Review: I like to think I’m a pretty easy guy to please; if I stick on an action movie to watch then I’d like there to be some action in it… y’know, cos it’s an action movie, right?

Alas, The Expert has about 10 minutes of action in its 90 minute run-time and considering Jeff Speakman’s martial arts prowess, I expected a bit more ass-kicking. Instead we get some courtroom drama (oooh) and a lot of Jeff Speakman looking kind of angry… but not beating enough people up. He’s an expert in Ken Po; give us some of that?!?!

It’s a shame as you’ve got a decent cast including James Brolin and Jim Varney; I was hoping we’d see Ernest Kicks Some Ass but nope, he’s only in one scene which is arguably the highlight of the movie.

Michael Shaner does his best Joker impression as serial killer Martin Kagan who is clearly having a lot fun but he’s more annoying than sinister.

The other major highlight is the score; it’s an epic orchestral score which is noisy and bombastic and TOTALLY doesn’t belong in this movie. The music is so exciting it’s almost like it’s from a cartoon but nothing in the movie is all that interesting.

There is the odd thought provoking debate about the death penalty and how criminals are seen as victims, but that is rapidly glossed over at the end and the message is really, yeah all criminals are in fact evil and deserve to die.

The last 10 minutes finally has some action with a pretty awesome bad guy death; he’s thrown off a roof and lands on an electrical pylon… nice!

Overall, I wouldn’t be in a rush to watch The Expert; I’d recommend The Perfect Weapon instead which has plenty of action and remains Speakman’s finest hour.