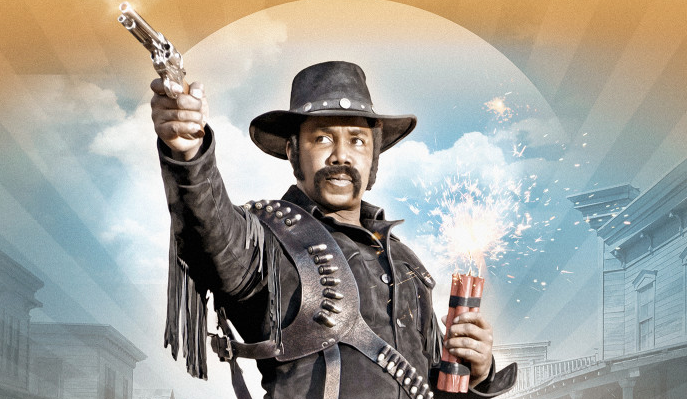 Plot: A wanted outlaw on the run assumes the identity of a small town preacher, leading to complications.

Review: Having witnessed his preacher and part-time trick shooter father Bullseye Black (Glynn Turman) get gunned down in cold blood by cutthroat rough rider Brett Clayton (Chris Browning, nicely cast) and his gang, Johnny Black grows up with a heart full of hate and vengeance, with only one goal in life: To track down and kill Clayton, using the bullet he’s carved with Clayton’s name on it. Johnny (played by this film’s co-writer and director Michael Jai White) has incredibly good luck wherever he goes: If he’s apprehended and hung, somehow the rope will break or he’ll be saved by Indians he’s helped out, and his luck goes with him like an unseen guardian angel. With a marshal named Bassett (Randy Couture) on his trail, Johnny somehow gets paired up with a chatty man of the Lord named Reverend Percival Fairman (Byron Minns) who’s on his way to Hope Springs, a town that is need of a preacher, and waiting for him in Hope Springs, Percival has the prospect of marrying a pretty young woman who’s been writing to him for two years.

As luck would have it, Johnny swaps places with the good reverend after they’re attacked by Indians, and leaving Percival to die (a Bible receives the blunt of the arrow’s intended death blow), Johnny assumes Percival’s identity and arrives at Hope Springs wearing the preacher’s frock and wielding a wisp of a notion that he can take the expected man’s place as the town preacher … and also somehow wind up with the good fellow’s intended bride, the comely Bessie Lee (Erica Ash) in the bargain. As soon as he arrives, the township embraces Johnny, but all he sees is an opportunity to rob the church’s reserves in cash, but when a corrupt and evil local land baron (played by Barry Bostwick) and his men try strong-arming and intimidating Bessie Lee and her sister Jessie (Anika Noni Rose) to sell their property, Johnny sees a chance to do some good in town before moving on.

Meanwhile, the good Reverend Percival Fairman shows up to assume the mantle that Johnny Black has taken from him, and so the two have to team up to get their priorities (and identities) straight, leading to some confusion and hilarity when the Lee sisters – who’ve already both fallen in love and lust with the strapping Johnny – realize they’ve been loving a liar and a swindler. When fate steps in and has Johnny Black’s father’s killer, the scuzzy Brett Clayton, riding into town, the lovable outlaw Johnny has one chance to flex his newfound faith muscles and forgive the man … or become God’s gun of holy vengeance!

There’s a fine line between spoofery and lighthearted ribbing that some movies skirt between, and I’ve never been a fan of spoofs of any kind, going all the way back as far as you care to go in cinema, and so I’m not the audience for movies like Airplane, The Naked Gun, or Scary Movie that sort of throw everything and the kitchen sink at the audience to reach desperately for a laugh. Michael Jai White has been down the spoof road before with the cult film Black Dynamite, which I saw theatrically and lamented for all its constant jokes and silliness. All the ingredients were there for a throwback retro blaxploitation movie, but instead I found the movie a wasted opportunity to let the incredibly talented martial artist and easy going actor Jai White to create and become a full-fledged heroic black character the way he did with the outstanding and one-in-a-million Blood and Bone. I found Black Dynamite reaching for cheap laughs, and its faux grindhouse style was ultimately an endurance test for me, but I’ve never derided anyone’s enjoyment of it because everyone has their own taste and styles.

What he’s done with The Outlaw Johnny Black is to re-calibrate what was off center about Black Dynamite and the film is a joyous jubilee and celebration of late ’60s and ’70s westerns starring black icons like Jim Brown, Fred Williamson, Richard Pryor, and Jim Kelly (think Adios, Amigo or Take a Hard Ride, for example). This film is an incredibly well written lighthearted comedy and does go the goofy road, but there was never a time where I felt the movie was mocking the genre or trying to go past the fragile barrier between comedy and spoof. It settles itself quite comfortably in a realm of badassery, comedy, and shockingly genuine faith-based drama. Jai White seems to have made an openly faith-based film here, and if I had to guess or tally, I’d venture to say that this movie has more scripture shared aloud (in earnest, not in jest) than any half dozen or more run of the mill Pure Flix-type genre efforts combined. Jai White’s character goes through a gamut of spiritual transformation in the film and becomes born again, and it’s a great thing to witness. The movie’s core values of Christian faith are not a joke at all, and the film is not weakened by that at all, no, in fact the movie is empowered by its message of forgiveness.

There’s plenty of action in the movie too, and Jai White gets to use his martial arts in several notable scenes where he takes on multiple comers at once, and fans of action star Paul Logan (who fared well in his fairly recent vehicle The Horde) gets his chance to get smacked around by Jai White real good. There are nods to films like Billy Jack and other touchstone films of yesteryear, and the movie has one of the most rousing and incredible scores I’ve heard in an independent movie in years.

The film climaxes with one of the greatest and unexpected endings I’ve seen in a long, long time, and by the time the end credits were rolling, I was literally clapping and cheering out loud at the special screening I attended – the movie simply could not have touched my heart or thrilled me more. I loved it, and I will be the first to say that The Outlaw Johnny Black is Michael Jai White’s best movie since Blood and Bone, no contest.