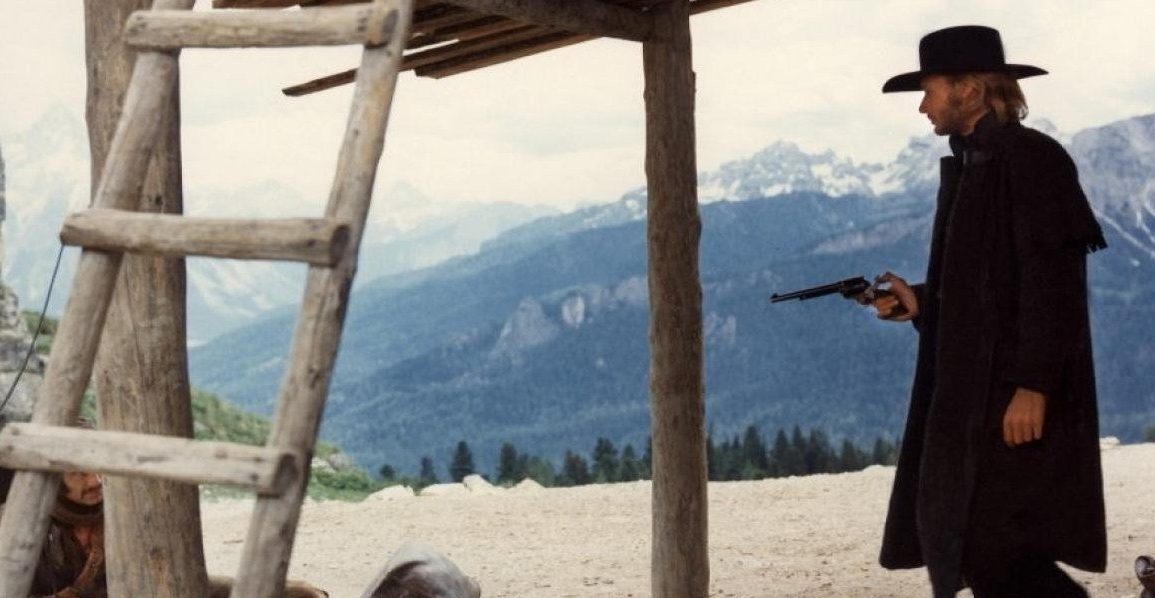 Plot: Hud Dixon (Johnny Hallyday) is a famous gunfighter that has arrived in the town of Blackstone in search of the killers of his brother, Charlie whom was framed for a bank robbery and then lynched by the townsfolk. Hud single handedly turns the town upside down in his pursuit of his brand of justice that leads to one of the town’s premiere citizens.

Review: “Spaghetti” westerns are a genre of action movies that seems to always be gaining new appreciation, critical reexamination and unrivaled discoveries. Maligned in its heyday of production, now it is a revered  genre all of its own. So it goes with all this attention comes better looking and restored prints and new physical media releases which brings us to THE SPECIALISTS (Gli specialisti).

A lesser-known EuroWestern, a French-Italian-West German production,  from the second great Sergio, maestro Corbucci, who also co-wrote the story and script, the renown director behind genre classics such as the original Django (1966) and The Great Silence (1968). Starring bad-boy French rock ‘n roller and movie star Johnny Hallyday as a dangerously cool drifter doing a decent job of giving his own spin on the Clint Eastwood prototype role from the “Dollars” trilogy. Seeking ruthless vengeance for his slain brother and in pursuit of the stolen money, he died for. THE SPECIALISTS, also known as  Drop Them or I’ll Shoot, is a no nonsense action-filled western with a wonderfully bonkers third act.

As is custom for the genre, THE SPECIALISTS includes colorful supporting characters including a scene stealing Mario Adorf, excellent action scenes well shot by cinematographer Dario De Palma, and a memorable film score by Angelo Francesco (A.F.) Lavagnino. Another grim and bleak dance of death from Corbucci, THE SPECIALISTS is also heavy on the macabre imagery that is a trademark of the director. It’s strange, highly entertaining and even pretty sleazy for a western in the the late 1960’s.

THE SPECIALISTS, however is not one of the finest of its genre, but by the same note, it is pretty damn good; it maybe less known, but it damn well deserves to be better known. The Kino Classics Blu-ray offers the movie in its original Italian and French language(s) with subtitles, minus its shortened and awful sounding English dub. Unfortunately light on other bonus features, especially for a “special edition”, limited to a theatrical trailer and an excellent commentary track from the director of the forthcoming “Tombstone Rashamon” and author on the subject of “spaghetti westerns” Alex Cox.  I saw the picture years ago with its English dub (which can be found on YouTube) and I was far from impressed,but poor dubbing, bleached out copies and mind numbing reediting can do that, but this 4k restored release gives the movie a fresh coat to look at and appreciate.