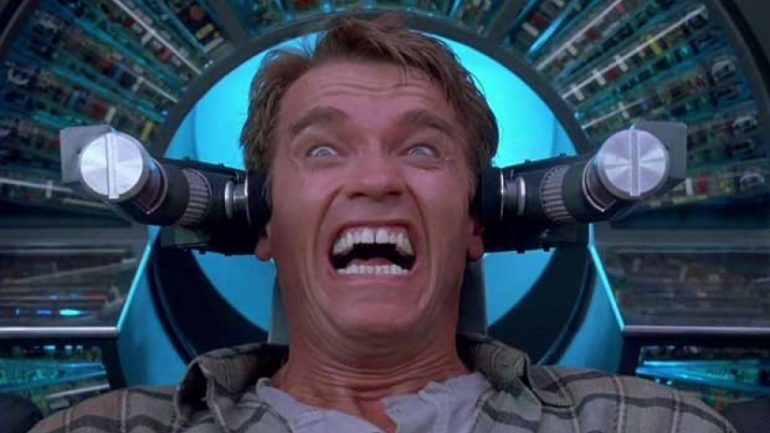 Total Recall is an action classic and my third favourite Arnie flick after Terminator 2 & Predator. Essential!

Plot: When a man goes for virtual vacation memories of the planet Mars, an unexpected and harrowing series of events forces him to go to the planet for real, or does he?

Review: Total Recall is a sci-fi classic by the masterful Paul Verhoven and it’s one of Arnie’s best films. Although lacking the satire of RoboCop and Starship Troopers, it has a genuinely mind-bending story and plenty of over the top violence.

Total Recall was a story originally written by Philip K. Dick entitled “We Can Remember It for You Wholesale”; the original story was actually quite different and didn’t even involve Mars.

The movie only benefits from these changes which makes it unlike anything that came before it and by the end you’re left wondering if it all really was a dream?

Few films will ever have a score that matches Jerry Goldmith’s amazing opening theme. In fact I consider it one of the best film themes of all time and this may sound odd, but it’s one of the most masculine-sounding movie scores too. This was the golden age of action movie music where they actually had theme tunes and even today it stands the test of time. Who remembers the music from the pointless 2012 remake? Nobody.

Total Recall has plenty hard R action, Arnie one-liners and still impressive visual effects (mostly); the only dodgy effect is when Quaid (Arnie) takes off his disguise when he’s dressed up as the “2 Weeks!” woman, which hasn’t stood up so well.

There are some hilarious bone crunching sound effects as Quaid breaks necks trying to find answers and this film has a huge bodycount, including innocent civilians who foolishly get in the way of stray bullets.

The scenes on Mars look great and there are some truly spectacular visuals; the set design is fantastic and I love the concept of the Johnny Cab too.

One of my favourite performances is by Rachel Ticotin who was always great at playing the tough but vulnerable female. As Melina, she really is one of my favourite action heroines, who is believable and likable at the same time.

Sharon Stone plays the bitchy wife Lori nicely and is the recipient of one of the best lines of the movie: “Consider that a divorce!”

Ronny Cox (a Verhoeven favourite) shows up as the villainous Cohagen who’s just a classic villain; he’s the administrator of Mars and even charges people for air. It’s his henchman Richter though who steals the show, played with relish by Michael Ironside. He also has a classic bad guy death at the end too: “See you at the party, Richter!”