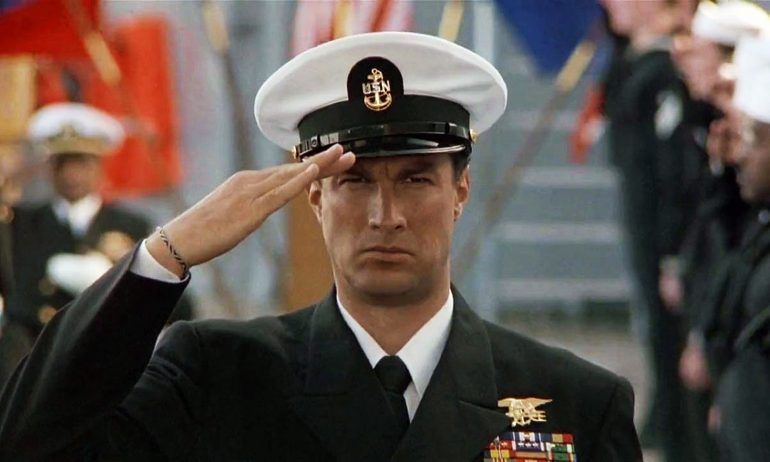 Under Siege is one of Seagal’s best films with some great action scenes and excellent villains. Essential for fans of Seagalogy.

Plot: A former SEAL, now cook, is the only person who can stop a gang of terrorists when they seize control of a US Navy battleship.

Review: Like Outlaw Vern states in his hugely entertaining book Seagalogy, Under Siege marked the beginning of the Silver era of Seagal. Marked for Death, Above the Law, etc are considered the Golden era when the movies were genuinely good.

Under Siege is one of the many Die Hard clones that surfaced in the 90’s but it’s also one of the best; it was Seagal’s first foray into big budget action and he makes the transition pretty well.

He plays Casey Ryback; a Chef with attitude aboard a Navy ship, but as with every good action hero he has a problem with authority and rarely shows any respect towards his superiors. This has him end up being locked in a meat locker while terrorists take over the ship.

Tommy Lee Jones and Gary Busey are on villain duties and both are excellent. It’s also one of the few movies where you see Gary Busey in drag, which is definitely a highlight.

Tommy Lee Jones is always worth watching and Strannix remains one of his best characters; he’s pretty nuts and I like how we never actually find out how he and Ryback know each other.

It’s well paced with plenty of action and Ryback dispatches bad guys without breaking a sweat. Unlike Above the Law where we actually see him bleed, Seagal is practically invincible in this movie which does remove any sense of real threat to the story.

As usual he wears his trademark black and we don’t see him in uniform until the very end at the Captain’s funeral. What is it with Seagal and black?

The weakest link is Erika Eleniak’s whiny sidekick who cries her way through most of the movie until she finds her courage and kicks some ass towards the finale. It should also be noted that she gets naked in the film which is another star in the movie’s favour.

Overall, Under Siege is one of Seagal’s best films with some great action scenes and excellent villains. Essential for fans of Seagalogy.