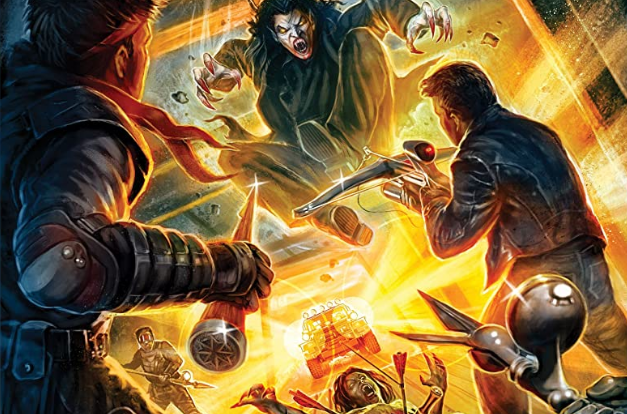 Plot: Recovering from an ambush that killed his entire team, a vengeful vampire slayer must retrieve an ancient Catholic relic that, should it be acquired by vampires, will allow them to walk in sunlight.

I used to watch this movie on repeat when it first came out back in 1998; it had been a few years since I last watched it and after seeing it pop up on Netflix last night, I thought I would revisit it.

John Carpenter’s Vampires doesn’t get spoken of the way his more well-loved pictures do like The Thing or Halloween, but this has always been one of my personal favourites.

James Woods plays vampire hunter Jack Crow whose entire team gets wiped out after an ambush so he vows to hunt down master vampire Valek (Thomas Ian Griffith) and destroy him once and for all before he get his hands on a cross that will allow his kind to walk in daylight.

James Woods is so perfectly cast as Jack Crow; he’s essentially a loudmouth asshole who is rude and belligerent to everyone he comes across including his friends (no acting required). He’s always been a difficult character to take to, but he has a tough job so it’s understandable as to why he is the way that he is. It’s refreshing to see Woods play a (slightly) more heroic character as we were always so used to seeing him play bad guys in movies like The Specialist.

Daniel Baldwin plays his loyal friend Montoya who is the other survivor of their crew that ends up developing a soft spot for hooker Katrina (Twin Peaks’ Sheryl Lee). She gets bitten by Valek so Jack and Montoya use her to get to him. As it had been so long since I watched it, I forgot just how mean they are to her in this film; she really gets treated like crap with Montoya even punching her and knocking her out at one point. Admittedly she did bite him so it’s understandable, but it is a little hard to watch and I never really bought their relationship by the end of it.

It was only on this viewing that I noticed Cary-Hiroyuki Tagawa was one of the crew as well but it was such a small role you’d have to look for him to notice him. Chad Stahelski also has a role and the action was done by Jeff Imada who also worked on the Bourne movies.

Thomas Ian Griffith was wonderfully creepy as Valek and although he doesn’t have much dialogue his demeanor just worked in making him an effective and nasty villain. Vampires does not spare the bloodshed either with some imaginative gore-filled set-pieces with one standout having Valek slicing someone in half with his hand. Hell yeah!

Vampires is a mixture of modern Western, horror film and action film with its desert settings and perfect twanging guitar music score; there is never any doubt that this is a John Carpenter film and to this day he remains one of my absolute favourite directors.

I love the banter as well with some hilarious one-liners and Jack’s bullying of the Padre (Tim Guinee) throughout as it helps to toughen him up so he can kick some ass for the climax.

I’ve never actually watched the sequel as Carpenter didn’t direct and it had a totally different cast but I feel like now I should watch it and review it soon.

Overall, John Carpenter’s Vampires is a blast with Thomas Ian Griffith making for an enjoyable villain and James Woods at his loud and obnoxious best. It’s packed with violent kills and a perfect Carpenter score making for essential viewing in my book.