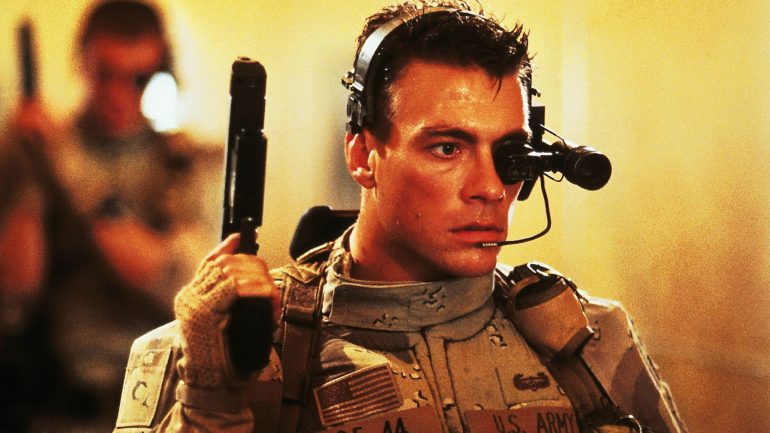 Universal Soldier still holds up as a hugely entertaining sci-fi action yarn with Dolph Lundgren chewing the scenery in one of his best roles to date; JCVD is also sympathetic as Luc and watching the climactic battle is as awesome as it was back in 1992.

Plot: Luc and Scott were killed in Vietnam, but the army has a secret project for reanimating dead people as near-perfect soldiers.

Review: Universal Soldier was the first Jean-Claude Van Damme movie I saw in the theatre; I loved it then and I still do today and it remains one of my all time favourite Van Damme movies.

It’s also my favourite Roland Emmerich movie; I forget he made this sometimes; the story isn’t all that original and is reminiscent of Terminator and many other movies, but who cares? It’s Dolph vs. Jean-Claude Van Damme and it has one of my favourite fight scenes in the history of cinema. Dolph’s bad guy death is the greatest of all time: “You’re discharged Sarge”.

Dolph is at his very best, hamming it up as Andrew Scott; he’s clearly having a ball in the roll; it’s a shame they took away his ear necklace and one-liners for Regeneration & Day of Reckoning; that really made the character stand out with choice dialogue like “I’m all ears!”

Despite being funny, Dolph still manages to be threatening in the movie and Andrew Scott is a classic villain so it’s no wonder they keep bringing him back.

Jean-Claude Van Damme plays Luc Deveraux as a man of few words but that plays to his strengths; he spends most of the movie trying to remember who he was and rediscovering his humanity. The alternate ending to the film is interesting as it shows that Luc is permanently put out of action and it has a far more somber tone. I prefer the theatrical ending as it’s a bit more feelgood and also kept it open for some sequels (some better than others).

Ally Walker is pretty likeable as reporter Veronica Roberts and isn’t as annoying as you think she might be at the start; I was surprised we haven’t seen her in much since as she’s a good actress. She’s done a few TV shows and films but nothing ever made her A-List.

Christopher Franke provides the score and although it is rather minimalistic, it still works to perfection and there is an awesome piece of music during the airport scene that has a great memorable tune.

The violence is Hard R and is still pretty shocking today so it remains one of Van Damme’s most violent films. I have to say that’s one of the best things about this series, rather than getting more commercial and kiddie friendly like so many other franchises, it arguably gets more bloody in future entries.

Overall, Universal Soldier probably remains one of my favourite JCVD movies, but also one of Dolph Lundgren’s best with his scene stealing turn as Andrew Scott who is an iconic villain. The action scenes still hold up and the climactic fight is a classic.