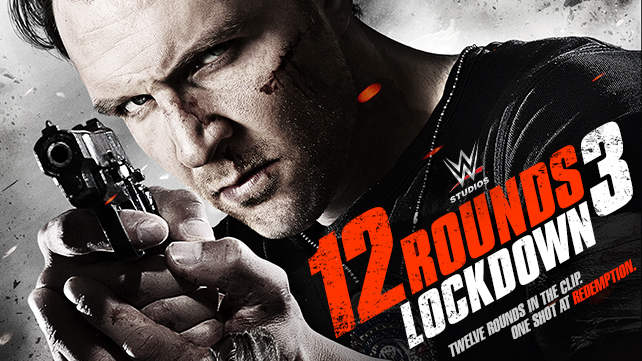 WWE signed off on it and allowed this to happen, and it’s by far the worst film from their canon – worse even than you can imagine.

Plot: Lockdown Follows a police officer who returns to duty after recovering from a gun shot wound to discover incriminating evidence of illegal activities against those closest to him. He quickly finds himself trapped inside his own precinct, hunted and in search of the truth, as the crooked cops stop at nothing to recover the evidence.

Review: Good concepts for action movies can be found out there. Die Hard had a great one, and then there were the riffs on Die Hard like Under Siege, Speed, Passenger 57, and every other “guy gets stuck in a place with terrorists” movie. No matter how many times it gets knocked off, it’s still a great idea. By the time the PG-13 rated WWE film 12 Rounds (starring John Cena) was released, the riffing got to the point where the riff was lifting the idea of the third film in the Die Hard franchise, and while the idea of a guy being forced to run around a city, doing impossible tasks for a terrorist, is fairly sound, it was never an idea that anyone should have been copying, but it was what it was, and it gave us another big screen effort from the hulked out John Cena, who to this day has never been given the vehicle film he needs to have to make him a full-fledged action star.

The first 12 Rounds, from director Renny Harlin (who did the far superior Die Hard 2: Die Harder), was bogged down by bloodless action, safe scripting, and a woefully weak villain who never stood a chance against Cena, who at least on the surface looks like a beast. When WWE eventually decided to spin 12 Rounds into an in-name only sequel franchise like they were doing with The Marine (which was another PG-13 Cena-starring vehicle), they’d moved on to the next tier of in-house wrestling stars and gave Randy Orton his shot at the title with the direct-to-video 12 Rounds 2: Reloaded. With Orton off shooting The Condemned 2, the next guy in line to headline another 12 Rounds movie was Dean Ambrose (a.k.a. Jonathan Good).

Ambrose doesn’t really look like much and hardly has the appearance of a wrestler (he never takes his shirt off in this film, so it’s hard to tell), but he’s got that everyman look to him, a little less like John McClane, a little more like the character Jason Patrick played in, say, Speed 2: Cruise Control. That’s a fair comparison. Ambrose is playing a cop named Shaw, who’s just returned to work after an extended leave following a shooting that got his partner killed and got him wounded. Everyone on the force is jittery around him, and no one is able to make eye contact with him because at this point he seems like damaged goods. I like it so far. Another cop – whom we know is a sociopathic dirty detective named Burke (played by Roger E. Cross) – is a loose cannon everyone in the department loves, and to say that he makes up his own rules using his badge as a license to kill is an understatement. He has a squad of dirty cops at his beck and call, and the lady police chief eats out of the palm of his hand.

It’s perplexing because Shaw gets a bad rap for doing his job safely, but Burke is a celebrity for being all over the map. It’s the antithesis of the cliché cop scenario, and so when things get wonky after Shaw realizes that Burke and his pals are dirty when he comes across a memory stick with damning evidence, the concept that the whole movie rests on kicks in. Instead of having Burke force Shaw to go through 12 grueling rounds of tasks throughout the city the way Die Hard With a Vengeance and the first two 12 Rounds movies did, Shaw gets stuck in the police station (which is several stories high) after Burke pulls the fire alarm, instigating a mandatory evacuation so that the building is empty. Burke and his dirty cop friends (there seems to be nearly a dozen of them) take over the building, shut the electricity off, man the video cameras, and jam the radio signals so that no calls can come in or out, making sure that Shaw is a cornered animal with only his sidearm – with 12 rounds of ammunition – as his weapon. That’s the idea this movie has, and while there’s a seed of a good thought there, you have to realize that in reality that idea is ridiculous and moronic.

On the inside of the building you’ve got one cop with only 12 rounds of bullets to kill off just as many bad cops who’ve locked him in, and they’re working their way towards him in groups, in pairs, and in singles, and while that sounds kind of okay, you keep thinking to yourself that this is taking place in a POLICE STATION where there might be other weapons stashed all over the place! Even after the hero shoots down and kills the bad guys, there will be OTHER WEAPONS to pick up and use, but he never thinks to pick up another weapon or go through some jackets and hanging belts for more clips. And what is happening on the outside of the police station? Does the fire department ever show up? No. When the other cops who’ve evacuated the station keep hearing gunfire in their place of work, do they ever do anything? No. The SWAT team is eventually called when it becomes apparent that Shaw has supposedly lost his mind and is killing other cops, but when do they enter the building? In the last five minutes of the 90 minute movie.

Once Shaw is locked in and the gimmick of the film takes effect, the movie becomes a joke that isn’t funny. I lost track of all the police men and women who are killed in the proceedings. Does Burke honestly believe for one second that he’ll get away with the things he does in the movie? Does anyone in the film ever for one second consider the consequences of the mess they make? There’s a scene where a bunch of guys shoot up the air vents in their own station. You know what I thought when that happened? That’s going to cost the department thousands of dollars in repairs. It gets to the point where the bad guys start picking up grenades to throw at Shaw, and nothing I could do could stop me from trying to reason through what these characters were thinking.

I love it when someone tries to make a new action star. A real-deal action star, the kind that comes from professional sports, martial arts, or wrestling. I’m always there to cheer the new guy or gal on, hoping that they’ll find the perfect movie that fits them like a glove the way The Perfect Weapon was tailor made for Jeff Speakman. That’s what I’m talking about – that serendipitous occasion when the stars align and bring forth the chosen one to carry forth the hallowed baton into action movie history. Honestly, I’d never heard of Dean Ambrose before. I’m not into wrestling, but I trust the WWE to introduce us to guys that will last the test of time – big dudes like Hulk Hogan, Steve Austin, and Dwayne Johnson. It’s not a terrible thing that Ambrose got the thankless gig of starring in the third entry in a second rate franchise. I mean, think about it. After Michael Dudikoff passed on doing American Ninja 3: Blood Hunt, David Bradley came into the picture and lasted a good while, starring in solid action and martial arts films, and carried the American Ninja franchise into its fifth and final entry.

I’m not sure what kind of future Ambrose has in action films, but if 12 Rounds 3: Lockdown is his only outing, then he got the short end of the baton. It’s not his fault the movie is awful, and it’s not even his fault that the movie has choppy, thrown-together action scenes. The director – Stephen Reynolds – should have taken a look at the junky, lazy script and said something before taking the job. WWE signed off on it and allowed this to happen, and it’s by far the worst film from their canon – worse even than you can imagine. I’ve seen them all – and most of them in theaters (12 Rounds 3: Lockdown was released theatrically in a limited spread) – but this one is the pits. It makes the first 12 Rounds (which was mediocre) look fantastic by comparison. That, my friends, is bad news.