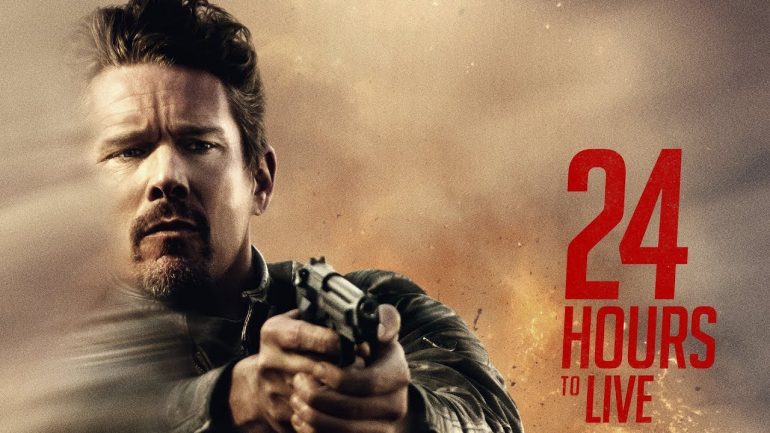 As an action fan, you owe it to yourself and the filmmakers to check out 24 Hours to Live.

Plot: A career assassin who is given a chance at redemption after his employer brings him back to life temporarily after being killed on the job.

Review: Having been an Ethan Hawke fan for quite a while now, it really peaked my interest to see how he would handle a full on action role. Yes, he showed his action chops previously in such movies as Getaway (with Selena Gomez) but in 24 Hours to Live, he gets to play a full-on bad-ass and in the process manages to make John Wick look like an amateur.  Now the John Wick similarities are as follows: both films have the same producers, both films are directed by stunt professionals (in this case Brian Smrz) and both films feature a one man demolition crew who takes on anyone in his path. That is where the similarities end. What you get with 24 Hours to Live makes up for some of the criticisms of the Bourne film franchise. You get full fight scenes with no shaky cam and no quick editing cuts. No close ups to hide the movements, what you see is action delivered to you in spades.

Ethan Hawke is perfect in his role as Travis Conrad, an ex-soldier who joined up with big bad military contractor, Red Mountain, and all he had to do for the paycheck was to leave his morals at the door. While on his self-imposed hiatus, his buddy and fellow soldier for hire Jim (Paul Anderson) shows up to recruit him for a job with a payday that he cannot refuse. It turns out that a former Red Mountain wet-work op is about to spill the beans on their nefarious doings so Travis has to eliminate him before he gets a chance to testify and bring it all crashing down. All Travis needs to do is get close to Interpol agent Lin Bisset (Qing Xu), who is guarding the former baddie, and find out where she is stashing him. As the plot of the film is widely used in the trailer, it is not a spoiler to say that our anti-hero Travis, gets killed and resurrected by Red Mountain using a new procedure they are testing. Of course they don’t really care about Travis, they merely want him alive long enough to pass on what information he has learned so the target can be removed. Sounds easy enough, but this of course, is where the proverbial shit hits the fan. With his second chance at life, Travis has a crisis of conscience and decides to try and make reparations and thus, havoc ensues.

While everyone in the cast give us great performances, ranging from uber-boss Wetzler (Liam Cunningham) as the archetypal corporate villain to Paul Anderson’s performance as the conflicted henchman and friend, this really is Hawke’s film. He is completely believable in is role and you can see the weariness and pain he delivers with each line.  Of course action fans will not be disappointed as this film features some of the best hand to hand combat and car chases I have seen in recent Hollywood films. It is obvious that like John Wick’s director (Chad Stahelski), having a stunt background has been a wonderful took for Brian Smrz, who knows what looks great on camera and how to pull it off  in a practical and cinematic way.

Overall, as one of my faves of the year, as an action fan, you owe it to yourself and the filmmakers to check out 24 Hours to Live.