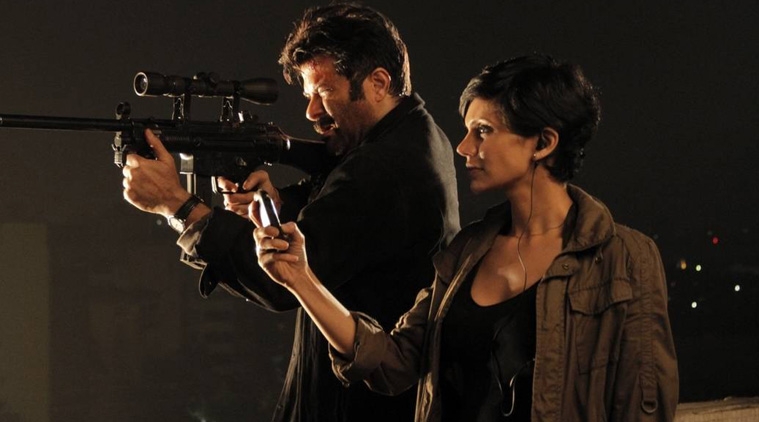 A rather fun remake of the popular American show that has enough action, acting and minor plot changes to make it somewhat entertaining for both fans of the original and other action lovers.

Plot: Jai Singh Rathod (Anil Kapoor, Tezz) abandons his wife’s birthday celebration to go to the ATU (Anti Terrorism Unit) headquarters for an urgent briefing. This angers the wife and daughter who thinks that he cares more about the job than them. He in the mean time learns that there is a plot to assassinate the youthful Prime Minister Designate who is supposed to be sworn in tomorrow. The candidate and his family seems to resembles a prominent political family in the land and his father was assassinated whilst in office. Meanwhile, we learn that the assassin hired to do the job is flying in from Thailand. In another story line, Rathod’s daughter has sneaked out in the middle of the night to attend a party. The wife gets very worried and asks for Rathod’s help. He uses ‘methods’ to hack into his daughter’s mail account and find out where she is.

Review: It was brilliant for Kapoor, who previously starred as a different political figure on the main 24 show, to readapt the format for India’s growing audience and I’m happy that it was a highly-rated and well-received show. The show features plenty of cool shoot-outs, cinematography and even twists around some of the plot twists of the original American show’s first season. The split-screen editing isn’t sacrificed either and there are also plenty of car chases and explosions, although not over-the-top nor done in typical infamous Bollywood fashion.

Now, unfortunately, this will disappoint people like me who were expecting a whole different show altogether as it can be a little dull at times when you’re watching the same story a second time when you could just rewatch the original version again. However, the group of veteran and newbie performers make for a welcome cast and international superstar Anupam Kher, Silver Linings Playbook) even appears in a key role. And the music is appropriately suspenseful as opposed to doing the typical Bollywood route and injecting random dance numbers that have nothing to do with the plot.

Sometimes the action scenes overuse annoying slow-motion but it’s rather subtle in the usage of that. By keeping one’s expectations low overall, you should have no problem watching this on a lazy weekend. It certainly could’ve been better but it could’ve also been a lot worst, especially considering that these guys chose to adapt one of the most groundbreaking action-mystery dramas of all time.