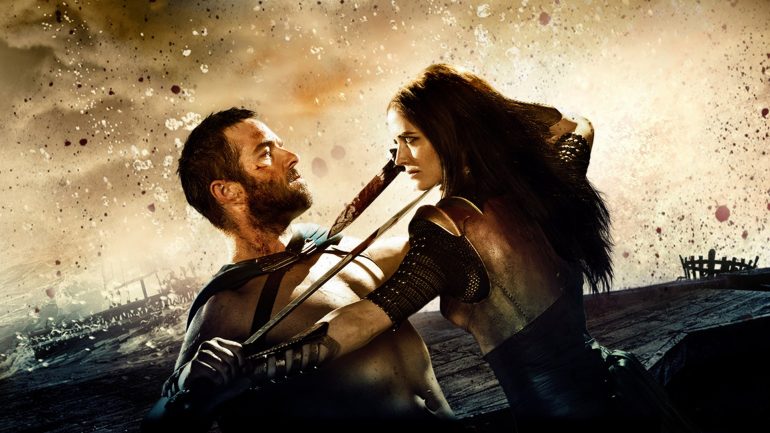 Eva Green is an absolute delight to watch chew the scenery but aside from that Rise of the Empire lacks any of the potency, passion or power of the original film. The lead actor has all the charisma of a wastepaper basket. Even the action scenes are a slog to sit through. From start to finish, it feels like a cheap knock off of the original.

Plot: While King Leonidas and his 300 Spartans have their date with destiny at Thermopylae, another battle against the Persians is brewing, this time at sea. Themistocles (Sullivan Stapleton), a Greek general, sees the threat posed by the God-King Xerxes of Persia. He knows that he must unite all of Greece if he is to stand any chance of repelling the Persian invasion. Even if he accomplishes his mission, Themistocles must still face Artemisia (Eva Green), the ruthless leader of the Persian armada.

Review: Let me say something I’ve no doubt more than a few of you may agree with me on: I think 300 may be one of the best movies since the turn of the millennium.

Though initially ripped apart by critics, moviegoers stormed theaters in droves to see it, setting pre-summer box office records that would stand until The Hunger Games, making actors like Gerard Butler, Lena Heady and Michael Fassbender household names, and making director Zack Snyder one of the biggest names in action cinema – at least until he became one of the co-conspirators behind the character assassination of Superman. Overall, thanks to a winning combo of innovate action scenes, hyper-stylized look, insanely quotable dialogue, and a winning combo of bombast and bravado, 300 remains a true cinematic crowd-pleaser just as good as the day it was released.

That said, like any truly successful movie, there came scores of imitators ranging from Beowulf to Clash of the Titans, which with rare exception, all proved terrible. Despite dozens of action movies trying to ape its aesthetic, and nearly every sword-and-sandal film of the last decade trying to emulate it as much as possible, not one managed to recapture that same lightning in a bottle that made 300 such a success, either financially or with fans. That is one of many reasons that should give anyone hoping lightning may strike twice with the long-delayed sequel, 300: Rise of an Empire. Ignoring the fact it’s spent most of the last eight years in development hell, the trailers bode ill for the film already – where 300 offered a textbook example of a great trailer, I couldn’t tell you anything about the trailers for 300: Rise of an Empire, despite having seen it dozens of times. Still, I vividly remember writing off 300 as a shock-and-schlock snoozer ala Sin City, before walking into theaters to have my mind blown away, so I decided to give 300: Rise of an Empire a chance – time will tell if this is madness.

Should moviegoers prepare for glory, or tonight do we dine in hell? Join me my dear readers, as I put its name to the test, as I review 300: Rise of an Empire.

In the clash of civilizations that was the Greco-Persian Wars, there are dozens of storied battles and personalities among the histories, among them the famed stand of Leonidas and the 300 Spartans at Thermopylae, the failed gambit for Greece by Persian God-Kings Darius and Xerxes, and the clever tactics of Themistocles of Athens, whose feints and foresight delivered stunning victories at Marathon and Salamis. It is upon Themistocles’ shoulders on whom the weight of all Greece is placed, for even as the Leonidas’ Spartans fight and die at Thermopylae, and even as Athens burns, his fleet must fend off the Persian Navy under the command of Artemisia, lest the rest of Greece meet the fate of Leonidas or Athens.

There is a reason that the tales of the Greco-Persian Wars have been told since Herodotus, because even discounting that it marked the birthing pains of the Western World, it makes for some great stories. Part of the strength of 300 was how it drew from the best parts of the collective mythos and then turned it up to 11, and ignoring much of that same mythos is one of the things that wrecks 300: Rise of an Empire, which seems to have made the ill-chosen move to throw history under the bus while half-heartedly emulating the more fantastic elements of the original film. It’s a pitfall that many other attempted successors fell victim to, in that none of them seemed to notice 300 had a winking self-awareness of its own absurdities – meanwhile 300: Rise of an Empire seems far more absurd while being more grounded. This is made worse by lacking both the energy and spectacle of the original film, with poor-pacing that absolutely drags at times making 300: Rise of an Empire a remarkably lifeless film.

Yet another glaring weakness of the film is that there has been a major downgrade in terms of cast. Another of the main strengths of 300 was that the performances played out like a particularly bombastic stage play, adding to the energy of the film, and a number of stand-out performances made the careers of several cast members. There is no Gerard Butler or Michael Fassbender here, and Lena Heady, David Wenham and Rodrigo Santoro may show up, but together they have maybe five minutes total screen time, leaving the rest of the film largely to a cast who lack the force of presence or personality to carry it.

The chief offender is Sullivan Stapleton, one of the latest in a long-line of Australian TV actors Hollywood drafted to headline an action film, and clearly proving unready for it – if his middling performance as Themistocles is any indication, he’s not the new Chris Hemsworth. I’ll give him some credit – I actually remembered his character’s name, which is more than I can say for most of the supporting cast. Don’t expect to be seeing the next Michael Fassbender or Lena Heady come out of this tragically.
The one exception to this could be had in Eva Green, who as the maniacal and bloodthirsty Persian admiral Artemisia, seems to be the only person in the film putting any effort into her performance. I’d say she steals the show, but that’s not really a compliment when your closest competition is an Aussie who sounds like he’s reading off cue cards. Yet even here, there are issues – her character essentially neuters Xerxes as a villain, and the liberties taken with her back story is among the worst examples of historical liberties in the film.

Finally, we come to the cinematography, and it shouldn’t be any surprise at this point that there isn’t anything special to see here. Say what you will about Zack Snyder, but there’s a reason he became a household name after 300 – when it comes to visuals and action choreography, the man is one of the best in the business, and first time director Norm Murro proves out of his depth trying to match it. In terms of visuals or action, it more often than not feels like a cheap imitation, and even the naval battles fail to stand out. More often than not, it just seems like the little things are missing – one of the most notable is that Tyler Bates’ booming score from the original that mixed guitar riffs and classical chorus’ with effortless ease has been swapped our for a generic score written by a DJ.

300: Rise of an Empire may be a proper sequel to 300, but its only the latest in a long line of failed spiritual successors who lack what made 300 such a success. While you could point to many factors, 300’s biggest factor in its success was how overwhelming it was, ranging from the memorable script, bombastic performances, stylized look, the booming score and brilliant action choreography. On the flip side of that coin, 300: Rise of an Empire’s biggest failing, and what ultimately tanks the movie, is how UNDERWHELMING it is – the plot drags, the performances are, with the exception of Eva Green, entirely lifeless, and in terms of cinematography, it looks and feels like a cheap knock-off.

Comparing 300: Rise of an Empire to 300 is like comparing Ephialtes to Leonidas, as although it masquerades as a Spartan, it lacks the heart, the guts or the glory of the real deal, and ultimately betrays everything that made the previous film stand out. 300: Rise of an Empire is naught but a poor imitation, as bland and disposable as 300 was memorable, and we’d have all been better off if this had been tossed off a cliff and discarded.