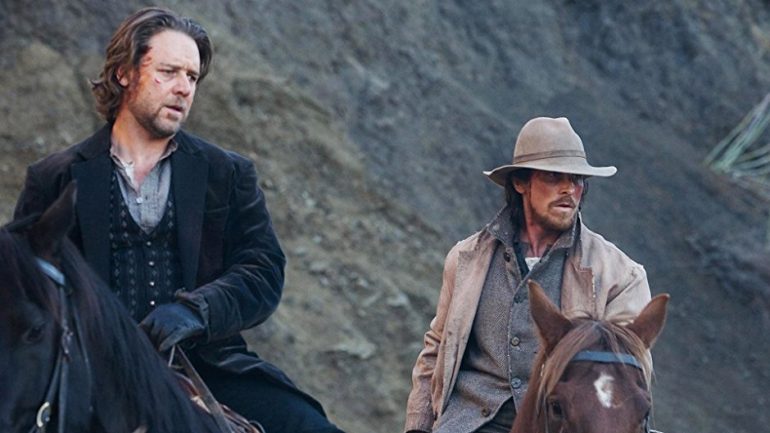 Anyone who purchases this disc will find themselves proud owners of one of the best soundtrack re-issues from the last few years. What great music this is.

La La Land Soundtrack Review: The 2007 western 3:10 to Yuma really pumped up the western genre. If you haven’t seen it, it might be time to get busy with that. Directed by James Mangold, the film starred Russell Crowe and Christian Bale, and it managed to update the 1957 original film (starring Van Heflin and Glenn Ford) and one-up it by giving the original source material by Elmore Leonard the colorful “R-“rated grit and gristle Leonard’s work is known for.

In the 2007 version, Crowe plays an ambiguous outlaw named Ben Wade, who is caught and held in a small ranching town, and no one is willing to escort him to the train to Yuma until a lowly rancher named Dan Evans (Bale) steps up and accepts the job nobody wants. The film is a nicely balanced psychological action film centered on these two polar opposite characters, and fans of the western genre embraced it as one of the better westerns to see a theatrical release in the last decade.

One of the great pleasures of getting a new film set in the Old West is finding out who scored the film and how well they manage to work in that genre. The score to the 2007 release of 3:10 to Yuma was composed by Marco Beltrami, who at the time had just done the modern western The Three Burials of Melquiades Estrada directed by Tommy Lee Jones, and Beltrami’s work on Jones’s film was easily the best thing about that picture.

It afforded Beltrami a chance to work on a unique canvas, and it was only natural that he would get hired on a full-blown, totally set in the old west movie, and 3:10 to Yuma was therefore the perfect project for him. From the first moments in the film, his forceful, powerfully thumping score makes an impression, and a great part of the reason why the movie works so well is because his music is driving it like a stagecoach with racing horses leading it by the stirrups.

It doesn’t so much sound like a “classic” western like say, The Magnificent Seven, but it has an entirely firm grasp on the classic sounds of a western with guitars, traditional western twangs, and even a pump organ. The music for this movie evokes desolation of the soul, longing, and the breathless instinct for survival, all while underscoring the film with beautiful melodies and themes that place you somewhere in the smoke of wastelands of an era long gone. This might very well be Beltrami’s greatest work as a composer, and he was rightfully nominated by the Academy for Best Original Score that year.

La La Land Records has recently re-issued the complete score to 3:10 to Yuma as a limited edition release. This CD contains over 60 minutes of music, which is almost 15 minutes more music than the previous release from Lionsgate Records, which debuted upon the film’s original theatrical exhibition. La La Land has given the soundtrack a much-appreciated upgrade, and anyone who purchases this disc will find themselves proud owners of one of the best soundtrack re-issues from the last few years. What great music this is. Personally, my favorite track is track #20 – “Who Let the Cows Out?” I mean, seriously, I’ve played this track maybe 30 times on repeat driving down the freeway with the windows rolled down. If this music doesn’t make you feel like an outlaw, then you’re dead.