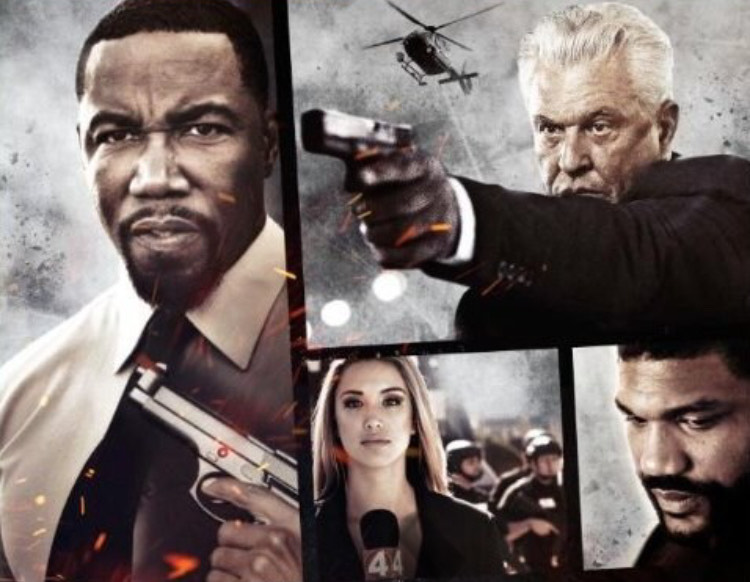 Plot: Strung out hostage negotiator, Michael (Michael Jai White, Black Dynamite), plays a dangerous game of cat-and-mouse with his estranged criminal brother, Jesse (Quinton ‘Rampage’ Jackson, Fire With Fire). When Jesse cornered robs a bank, he ends up becoming hell bent on getting out even if it means humiliating his own sibling in the process!

Around this time, Jai White was continuing his trend of DTV movies, in-name-only sequels to theatrical blockbusters and TV guest spots. He’ll always be Black Dynamite, let alone Spawn, Gambol in The Dark Knight or even SETH in Universal Soldier 2! He’s so constantly busy that it’s hard to keep up with all his efforts but was this a trip worth taking movie-wise?

In one word: yes. And that’s because while this was extremely low-budget visually, it still had tons of clever plot twists, a solid cast, an organized vision and professional edits and sound. The best kind of movies are the ones that don’t bullshit, admit whst they are from frame one and which utilize their resources to format a coherent entertaining escapade. Speaking of the cast, it was rather neat and key to part of this film’s success: Victoria Pratt (Mutant X, Daybreak) was the police therapist who assisted with hostage negotiations; Tom Berenger (Platoon, Sniper films) as the arrogant police captain; Patrick Kilpatrick (Death Warrant, Best of the Best II) as one of the cops who has some sketchy backstory; and Chuck Zito (Oz, Sons of Anarchy) as one of the foolish bank robbers. Aside from those meaty roles being well-manufactured, the writer/director Scott Windhauser (who previously reshot the Dolph Lundgren zombie sci-fi film Dead Trigger the same year) kept things brisk, cast some of his same bit-part actors and producers in positions on this production and made an engaging 90 minute escape.

The film has plenty of tropes that we’ve seen in other hard-boiled cop thrillers: police corruption like in Training Day; imperfect crisis responders like in The Negotiator; hostage takers with unfathomable demands like in Dog Day Afternoon; and plenty of dangerous criminal pursuits like in Heat. This won’t change the genre but at least it knows it and wears these inspirations like a so-called badge of honor (no pun!) instead of being a heavy-handed homage filled schlockfest. The eventual ransoms, other double crosses and other mayhem do pay off instead of feeling like some filmschool hack getting way too cute off of films he clearly loves too much.

Obviously, some subplots could be trimmed or even omitted but at least the whole thing didn’t drag and feel like a chore. A few extra thousand and it could had been a NBC/FOX/CBS TV movie or pilot to a fall season show. But it’s able to get the blood flowing, not have too much distractingly bad lighting nor become quickly tedious. Too many VOD/DTV films end up feeling like blueprints or like too many B-listers getting drunk and turning on their iPhones over a party-filled weekend, and this fortunately proves an exception where you can see a film with restrictions being part of their appeal and actually making use of both its talent and gimmick.