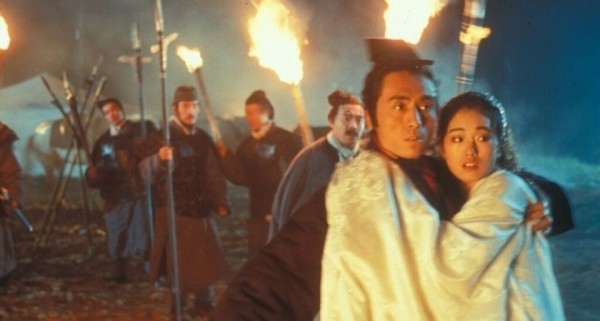 A Terra Cotta Warrior looks great in its widescreen splendor, and it has a dubbed English language option for those not into subtitles. It’s worth a look, but it’s no classic.

Review: Over 3000 years ago, an architect named Tian Fong (Zhang Yimou) is building a mausoleum for the Emperor, and on a fateful day when the Emperor (played by Suk Bung Luk) comes to visit the site, some assassins have targeted the ruler for death, but Tian Fong intervenes and saves his life. Immediately promoted to Chamberlain with the Emperor’s gratitude, Tian Fong’s life takes a sharp left turn as he’s forced to live at the palace, protecting the Emperor and attending to duties he’s unfamiliar with. The Emperor, meanwhile, has a preoccupation with finding the secret to immortality, and he tasks his chamberlain with overseeing a massive voyage of 1000 virgin maidens and warriors that will traverse the globe in search of a magic elixir. The task proves to be too much for Tian Fong, as he falls in love with one of the young virgin women – a beauty named Winter (played by Gong Li). When the Emperor’s alchemist does indeed create a potion for immortality on the eve before the voyage is set to begin, Tian Fong and his lover consider suicide before the Emperor discovers their betrayal, but that plan backfires when Tian Fong ends up taking the elixir and is sentenced to become one of the Emperor’s “Terra-Cotta” warriors (a stone statue that guards the Emperor’s tomb forever), while Winter is burned to death.

Flash forward 3000 or so years, and the reincarnation of Winter (Gong Li again) is an aspiring actress in 1930’s China. During a film shoot near the Emperor’s real mausoleum, a plane crashes, exposing the tomb of the Emperor and breaking apart the terra-cotta stone that entombed Tian Fong. Since he’s immortal, he emerges as a fish out of water and gets into all sorts of adventures, as the world has drastically changed since he last breathed air. He immediately mistakes the actress as his true love, and everyone around him considers him a villain as he causes mayhem everywhere he goes. A violent finale has a bloody duel between him and a scoundrel who kidnaps the actress, and in a turn of events she’s slain. The terra-cotta warrior goes underground for another 50 years and waits for the reincarnation of his true love once again …

A full-scale, epic fantasy action film that spans thousands of years, A Terra Cotta Warrior is a mixed bag, but at least it’s interesting. It’s kinda like Highlander meets Raiders of the Lost Ark (complete with a scene where a screaming Gong Li falls into a pit full of skeletons that surround her). The first act of the film set in ancient China is pretty fantastic, but once the movie goes into modern times, the film enters farce and unbelievable comedy, but with extreme violence. The performances are all over the place, with misguided comedy and dramatics (which is on par with so many other Chinese films). Directed by Ching Siu-Tung.

Newly released to DVD-on-Demand by Warner Archives, A Terra Cotta Warrior looks great in its widescreen splendor, and it has a dubbed English language option for those not into subtitles. It’s worth a look, but it’s no classic.