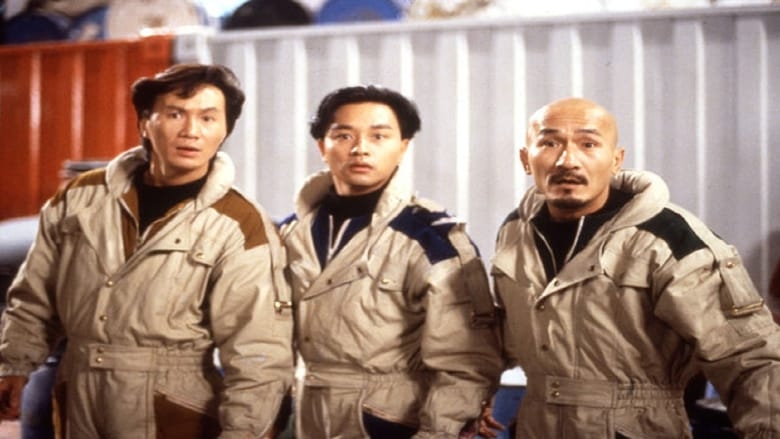 Aces Go Places V has plenty to recommend it like a character named “Chinese Rambo”, a villain whose cat is a hand-puppet, Sam’s boxing-ring bed and well choreographed martial arts sequences. The chemistry of characters from previous films is gone, Sylvia Chang is absent and there’s a slow maudlin middle.

Plot: Two friends who own an investment firm turn to a policeman friend for help when they are framed for robbery by a gang of antiquities smugglers.

Review: Sam “King” Kong (Sam Hui) and Albert “Baldy” Au (Karl Maka) are now disowned by the Hong Kong police and are hired guns, breaking up after a disagreement from a job. Years later, a brother-sister burglar team called the “New Aces” (Leslie Cheung as the brother and Nina Li Chi, Jet Li’s wife(!), as the sister), steal a powerful sword called the Chinese Excaliber from a gang who themselves steal the legendary Terracotta Warriors, while framing Sam and Albert. Both new and old Aces are hired by the Chinese government for one more heist: to take back the Terracotta Warriors for the People’s Republic of China!

Also known as Mad Mission V: The Terracotta Hit, Aces Go Places V features some fun ideas up-front, like the Ministry of State Security operative called “Chinese Rambo” and Sam’s bed which is basically a wrestling ring with a giant picture of King Kong (the ape, not Sam) hanging over it. There are some spectacularly graceful fights, one featuring sword fights in a cafeteria and a climactic fight including fighters disguised as the Terracotta Warriors hiding among the real ones. A neat twist on the classic villain-stroking-a-cat, the main bad guy has a cat hand-puppet that he constantly pets as if it’s real, which is a little disturbing at times as it sometimes looks like a living thing.  The Chinese Excaliber is awesome, living up to its Excaliber name in that it can cut through anything. Kong and Baldy are great together as always and the “New Aces” are charming, with some neat outfits that show off Nina’s general, all-round hotness.

The bad? Sylvia Chang’s absence is sorely missed here. It’s not an Aces movie without Nancy and Albert yelling at each other. Both Nancy and the son are written out with Albert saying that they are in Canada while he stays behind and deals with bad investments. The new brother-sister team is cool and all, but they don’t have the chemistry that Sam and Albert have, and even that chemistry is undercut by a plot that sees Sam and Albert broken up for half the movie. The scenes in the prison are certainly different, but isn’t mad-cap fun like the other Aces films and really drags the film down. The final battle is cool, but the huge stunt-spectaculars of the past are gone here.

Aces Go Places V is still worth watching for some terrific fight sequences, but the middle is slow and the energy of past Aces movies is gone. This was the last Aces movie to feature Sam Hui and Karl Maka. A sixth Aces movie was made 8 years later, ’97 Aces Go Places, basically a reboot/very-loose-sequel with a brand new cast. Still, the original movie series is one of the most fun, spectacle-filled film series of the 80’s.