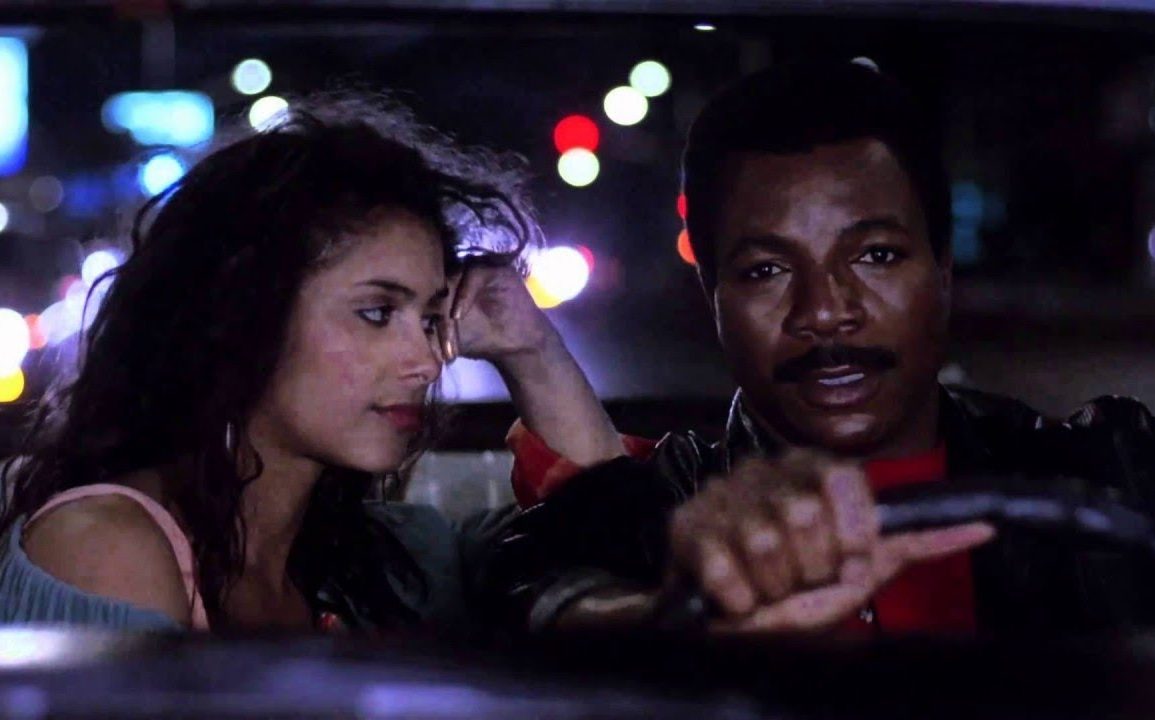 Aside form some eye-rolling dialogue Action Jackson is a riot with Carl Weathers on sparkling form, wicked action, people getting thrown through lots of stuff, flamethrower deaths and Weathers driving a car upstairs. What’s not to love?

Plot: Due to the use of excessive force in arresting a sexual predator, Detective Lt. Jericho “Action” Jackson (Carl Weathers) is demoted to police sergeant. What’s worse, the father of the man he roughed up, Detroit industrialist Peter Dellaplane (Craig T. Nelson), declares war on Jackson, framing him for the murder of his own wife, Patrice (Sharon Stone). But Jericho manages to elude arrest and, with the help of a drug-addicted singer named Sydney (Vanity), goes after Dellaplane.

Review: Carl Weathers is tough, no-nonsense cop Jericho “Action” Jackson, on the trail of evil Peter Dellaplane (Craig T. Nelson, convincingly sinister here) who is trying to literally kill off his competition as he dominates the auto industry (an odd but refreshing villain setup after years of drug lords in action movies). To do this, Jackson smashes people through many plate-glass windows, throws unfortunate souls through doors, walls and onto adjacent buildings, flame-throwers henchmen, jumps over a speeding car, and even drives a car into a house, impales a henchman on the grill and drives up a staircase into the villain’s bedroom (a personal favorite scene). Jackson befriends Dellaplane’s mistress Sydney (forgotten singer Vanity, who’s very easy on the eyes here) and tries to protect Dellaplane’s aloof wife (pre-megastar Sharon Stone) with mixed results.

I’ve seen Action Jackson many times and on a recent viewing I was struck by just how corny the dialog in this film is. The beginning features two comic-relief cops telling a street thief how tough Action Jackson is, not by describing how big and mean he is, but by telling the teen that Jackson’s DNA is crossed with Bigfoot’s and that he was genetically engineered to walk on the Moon without a space suit. It’s laughably stupid, but the script wants you to be convinced that the hood would believe all of this enough to show the guy faint twice at the sight of Jackson and run away from Jackson in fear on two other occasions. It’s so goof-ball and doesn’t really work. Still, it’s fun to laugh at it rather than with it.

Beyond the fast-paced, kinetic energy, this movie’s strengths are Weathers who is awesome in this, and Nelson who is really sinister in his role as chief bad guy. The other players are interesting too. Some scene stealers include Vanity’s gigantic bodyguard (Prince A. Hughes) who is a peaceful Muslim and medical student on the side, and a former boxer turned hotel manager (Chino “Fats” Williams, who has an amazing voice you really have to hear) who has a scene where he tries to convince Dino to bite Fred Flintstone’s hand on TV. It’s a throwaway bit, but I thought it was pretty funny.

Action Jackson is an eventful action romp with lots of energetic scenes, a playful, jazzy score, and lots of colorful characters. It also satisfies all of the action requirements: a bad guy who’s so vile you want to see him get his ass kicked, interesting henchmen who have confrontations with the hero, and a showdown between Weathers and Nelson. Oh, and Carl Weathers destroys a lot of guys! Wickedly good fun.