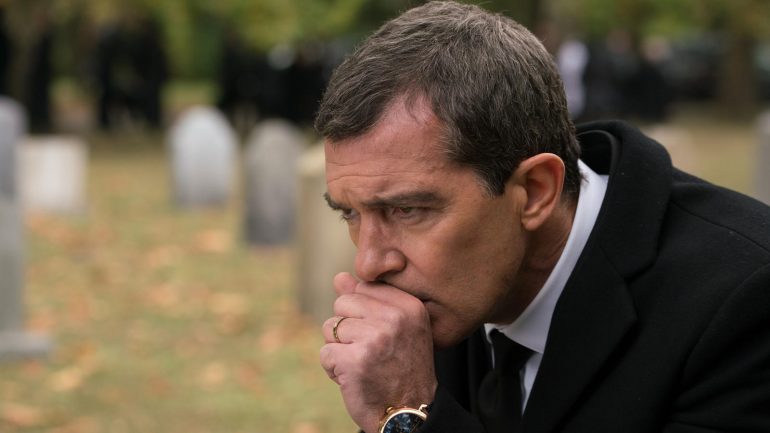 Acts of Vengeance is a very strong and impressive entry for both Florentine and star Banderas, who transforms himself into quite an action star.

Synopsis: A fast-talking lawyer transforms his body and takes a vow of silence, not to be broken until he finds out who killed his wife and daughter and has his revenge.

Review: Celebrity lawyer Frank Valera (Antonio Banderas who seems to be on an action star career upswing) is devastated when his wife and daughter are murdered and thrown in a ditch on their way home from a talent show. Valera can’t cope, and his life careens into a downward spiral of alcoholism and penance as he allows himself to be beat to a pulp every night at a local underground fight club. But one night he has an epiphany: He will discipline himself in the martial arts and become a “stoic” – a silent man on a quest for justice – and rebuild himself from the ground up. With no help from the local police department or a buddy cop named Strode (Karl Urban), Valera befriends an abused police dog that helps him through his tough time, getting a little closer to the answers he’s been seeking. As he zeroes in on a suspect in his family’s slaying, he has already worked his way through the local Russian mafia (his martial arts skills have become pretty impressive) and has made an ally in the form of a nurse with dark secrets of her own.

From director Isaac Florentine (the Undisputed and Ninja movies), Acts of Vengeance is a very strong and impressive entry for both Florentine and star Banderas, who transforms himself into quite an action star. Banderas has been very busy lately with four releases this year – Black Butterfly, Gun Shy, Security, and now Acts of Vengeance – and he’s proving that he hasn’t become complacent in his maturing years. This film is one of his best movies, and it’s certainly Florentine’s finest hour because it feels so personal. Florentine himself appears in a cameo as a martial arts sensei in it.