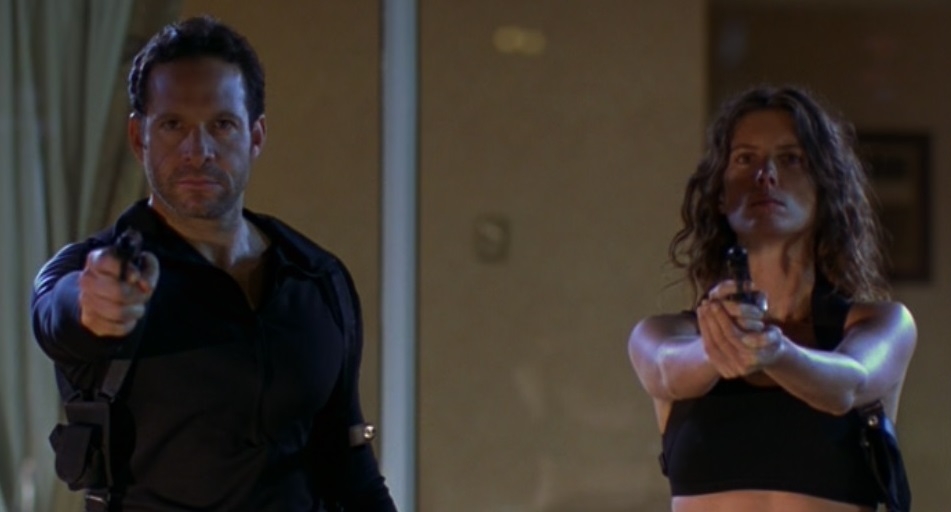 Airborne is entertaining for all the wrong reasons with Steve Guttenberg failing to convince as an action hero; it’s also rather dull too with little to recommend it so I’d give this a pass.

Plot: Bill McNeil heads a black ops team called “Mach 1” called in to retrieve a cannister of deadly viral agent which was stolen from the government by an arms dealer. The team retrieve the weapon but the team is setup. Bill knows a traitor is behind things.

Review: So, I was looking through Sean Bean’s filmography, and discovered Airborne which I’d never heard of until now, so I decided to check it out.

Well, to be honest this is really bad, but it’s one of those that Rifftrax could easily make fun of.

Let’s start with the cast; some of them do their best, while others try too hard, especially Steve Guttenberg, it’s like he’s trying to be Steven Seagal, but can’t do it right at all; what’s also baffling and hilarious is his line delivery especially during certain scenes.

The story is uninteresting and quite dull and boring, and there’s a supposed “twist “ that’s incredibly predictable especially if you’ve watched a lot of these types of films.

The action that does come is decent, but doesn’t really save this one, as it comes way too late.

Overall, I wouldn’t recommend this unless you invite your friends over and have a good laugh especially with Gutenberg’s line delivery, but that’s it, there’s nothing more that I can say about this.