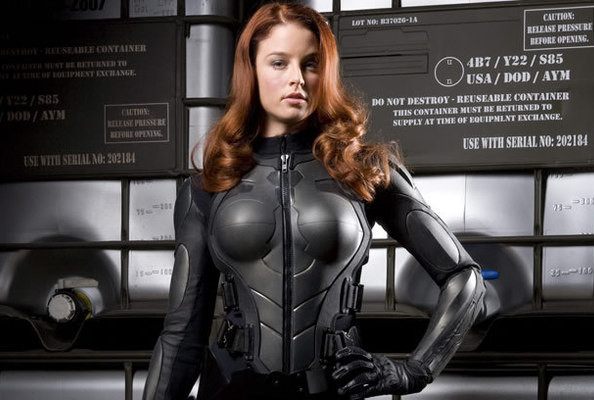 All New Interview with Rachel Nichols

Usually cast as a strong heroine who’s formidable with an assortment of weapons (swords, axes, and a plethora of guns, come to mind), actress Rachel Nichols has been one of the most front-and-center stars of some of the biggest and best genre projects over the last handful of years. Her roles in T.V.’s Alias (2006), P2 (2007), Star Trek (2009), G.I. Joe: The Rise of Cobra (2009), Conan the Barbarian (2011), and the four-season show Continuum (2012-2016) all showed that she was an alluringly capable action-centric performer, and in this year’s post-apocalyptic zombie thriller Pandemic, Nichols stars as a mother trying to traverse an urban wasteland to get to her daughter. In this interview, Nichols shares some of her memories of working on a number of her projects and discourses on the apocalyptic genre and her strong role in Pandemic.

You’ve been in some great projects. I remember watching you on Alias, and I’ve followed your career into P2, G.I. Joe: The Rise of Cobra, and Conan the Barbarian. Just in the last few years, you’ve had your own T.V. series Continuum and now you’re in the post-apocalyptic zombie film Pandemic. Do you gravitate towards action projects, or do you get them because you’re so good at it?

Thank you for following my career, I appreciate that. For me, I’m very empowered by the fact that I’m able to do so much cool, kick ass chick action. People believe me doing it because I love doing it. It’s one of my favorite things to do. There’s something that draws me to it, and there’s nothing like a good fight scene, I’ve got to tell you.

I love the genre. I’m not sure that I ever thought that I would. It’s become so fascinating, and I give huge credit to The Walking Dead and other films that are sort of similar that are in the same genre. There’s something about it that is enticing and interesting to me. I’ve always loved that sci-fi aspect. I love the horror/thriller aspect. It technically should not exist in the world today, but who knows? Being an element in Pandemic was exciting. The scene where Missi Pyle and I are suddenly shut out in the dark in the back of the signage shop and we get attacked by that super creepy looking dude – who was lovely in real life, but who was very scary when we worked with him. It felt so real, and I have this joke with a couple of my girlfriends, I say, “I don’t care about humor anymore, I don’t care if he’s got abs, I just need a man who can get me out of a zombie apocalypse!” That’s dating criteria these days. Being in that element was fun, it was exciting, it was thrilling.

You’ve been in several different genres over the years, which means all sorts of unique costumes. In Star Trek you were painted green, and in Pandemic you had to wear a Hazmat suit through most of the movie. What was that like working in the confines of that suit?

(Laughing.) The HAZMAT suit presented quite an adventure, quite an experience. We were shooting in L.A. in October / November, and it was uncharacteristically hot. Those suits, as I’m sure you wouldn’t be surprised, don’t really breathe … it’s not really a breathable material. It was very, very hot. We would sweat all day in those suits. I know Missi did. We would wear sort of tights and long johns under the suits, otherwise they would stick to our skin. I am also horribly claustrophobic, so having to wear a helmet and run and act and be actiony and do all of those things was a challenge for me. When you see fog on our masks, that’s real. If we breathe too hard, they would fog up. When I was doing it, I was loathsome of it, but it probably loaned itself to that scenario. It lent itself very well to the way the movie came out. It was honest and raw and brutal in a bunch of those scenes at how uncomfortable those outfits could be. I got lucky, but Mekhi Phifer, and I believe Alfie Allen … I believe their gloves were actually taped to their suits, so they had another layer to their suits that they had to take off. There were a couple of scenes where I had to take my gloves off, and we agreed that if they were taped, it would be really impossible to use, so I got lucky in that respect. I could at least cool my hands off, if need be.

I’ve got to ask you some questions about Conan the Barbarian, if that’s cool.

I actually went to see it in theaters five times when it came out. I loved it.

Talk about working on Conan and working with Jason Mamoa and your director Marcus Nispel.

I had a fantastic time working on it. I love Jason. He’s gigantic and he looks menacing, but he’s the biggest teddy bear you’ll ever meet. His wife and their two kids came out while we were there. He’s a family guy. I loved that about him. I felt safe going anywhere and everywhere in Sofia, Bulgaria where we were shooting with Jason because he’s so massive and no one is going to mess with him no matter what. I adored him from the moment that I met him. Marcus is hilarious. Marcus is German, and he’s very passionate, and he was great directing. He gets very into the aesthetic, and that’s one of the things that was really interesting about Conan – the way that he made the movie look. The shots that he wanted. He was very specific. His aesthetic is fantastic. [Thomas] Kloss, who was the DP, I think he made the movie look absolutely fantastic. I had a good time. It was Bulgaria. It was a new place for me to go. Not sure I’d ever take a vacation there, but I made some close friends. I’d like to work with Jason again.

The sword and sorcery genre is completely different than the post-apocalyptic genre, but were you able to immerse yourself in that genre at all?

Sure, yeah. We had a great stunt team and stunt department, and that always lends itself really well to making things believable and realistic. I hadn’t done a lot of sword play prior, and most people don’t know this, but I had never ridden a horse prior to shooting the movie, so when I got to Bulgaria, I immediately started working with a horse trainer so that I could actually ride the horses in the movie and I could lead the horses while riding the carriage. The sword and sorcery genre was new to me, but we had a great stunt team, and I always give major props to the stunt team, all the coordinators and all the doubles that I’ve had because especially on that film … believe me, I was not the one jumping from the carriage onto the horse. That was Monique Ganderton. That was not me. I love the sword and sorcery genre. I love learning new skills. I’m up for anything.

G.I Joe: The Rise of Cobra was another fun one. I grew up playing with the action figures. You got to play in the boy’s sandbox with that film. Say something about working on that one.

You know what? I loved it. It was so much fun. If you look at the cast: Sienna Miller, Joseph Gordon-Levitt, Channing Tatum, and Marlon Wayans … we had so much fun. I’m not going to lie. We shot for four months in Downey, California, and then we went to Prague for a month. Prague doubles for most of Paris. It was so much fun. I adored Stephen Sommers, who directed it, and Lorenzo di Bonaventura, who produced it. I like the movie. Playing in a boy’s club, playing in a boy’s sandbox, I love that. I will totally go toe to toe with the boys on anything, in any department. I’m also a very good shot, so I’m probably going to win most of the time in any category.

(Laughing.) And P2 is another one. I had so much fun on that too. I loved Wes Bentley. We got on so well, which is a good thing because there were only two of us, pretty much, in the movie. I learned how to wield the ax. The first day they gave me an ax, they tried to give me a prop that weighed about as much as a paper clip. I said, “Guys, you’re going to have to give me something that weighs something. Maybe not the full ax, but it needs to weigh something, otherwise it’s going to look like I’m carrying a paper clip.”

So back to Pandemic: If the world were to end as it’s shown in Pandemic, do you think you’d survive in that world?

Absolutely! You’ve got to believe in yourself, right?

Pandemic will be released in theaters on April 1st and on VOD and iTunes on April 5th, courtesy of XLrator Media.